No Way to Begin by Misuzu Sasaki 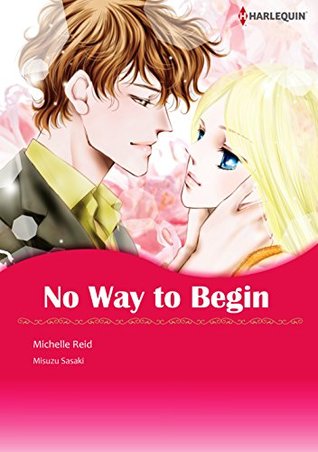 NO WAY TO BEGIN was bundled in with another Harlequin manga I bought. I was wondering why the book in question was 400-pages long. Turns out it was because I was buying 3 for the price of 1, and that 1 was 99-cents. Nina decides to infiltrate (read: sneak into) the house of the billionaire Greek investor who has bought her father's business in order to plead with him to reconsider. Her father's ailing health, combined with the loss of face, has led her to believe Anton is responsible for his ruin.

Anyway, she ends up in his bedroom and he's surprised - but pleased - to see her there, much to her horror. When he drunkenly tries to put the moves on her, she announces that she has a fiance named Jason. But Anton already knows. And he tells her that Jason is the one her father is fretting over. Anyway, she confronts her ailing father and finds out that Anton is the only thing keeping his company afloat, and that Anton actually wants to marry her in Jason's stead. Jason agrees, selling Nina off for 900,000 Euros. So romantic.

Anton tells her that if her father's health takes a turn for the worst she's free to call off their engagement but in a Beauty and the Beast like twist, that's put to the test, and she decides Stockholm syndrome has its advantages, especially in the form of an Adonis who's as rich as Croesus and as promiscuous as Zeus. So she stays with him and they end up happily ever after, the end.

I really didn't like the art style in this book. It was very juvenile, like the middle school manga you sometimes come across for girls who are thirteen. That was at odds with the storyline, which kind of wanted to be dark but also wanted to have its romance cake and eat it too. I was also a little confused about the Jason storyline - was he actually her half-brother? Incest is gross. If that was the case, she didn't seem as shocked and horrified by that as she should have been, but then, this book was weird.

I also didn't really dig the heroine (who actually says, "KYA!" - ugh, she is so manga basic) or the hero, with his "I'm holding info back from you for your own good"/drunken rapeyness actions. He was a slimy creep, and when the hero is the slimy creep, it's hard to root for love. I'm glad this came bundled for free in my other book because I would have been annoyed had I spent actual money on it.