The Bachelor Bid by Makiko Harada 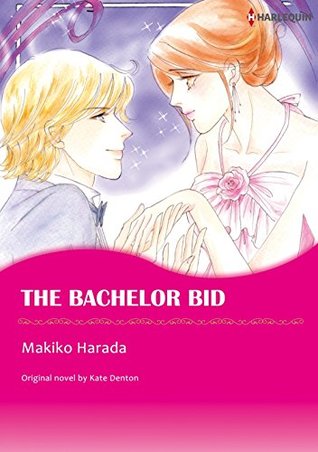 I almost didn't buy this book, even though it was an oh-so-tempting 99-cents, because it sounded almost too cheesy - even for me. But a deal's a deal's a deal, so I bought it anyway, and to my surprise, I actually really enjoyed this HQ manga a lot! Cara Breedon is a secretary at an advertising firm and tasked with getting the wealthy playboy/millionaire, Wyatt McCauley, to agree to be a prize in a bachelor auction for charity. Wyatt refuses, but flirts with Cara outrageously and embarrasses her a lot, but because her job is on the line she persists in asking. Just when she thinks she's about to be fired, Wyatt agrees - but, surprise twist - he's had someone in his employ place the winning bid in her name so she has to go out with him.

I liked this book because Wyatt wasn't a total tool. He was a playboy, but a more exasperating one than an infuriating one, and I liked that he genuinely cared about the heroine. The art style reminds me a lot of Yoko Kamio (of Hana Yori Dango), especially how she draws the men, which made me really happy. HYD was my OG favorite shoujo, so whenever I encounter a mangaka whose style reminds me of hers, it makes me feel nostalgic in the best way.

In fact, THE BACHELOR BID is a manga adaptation that actually made me want to read the original Harlequin novel it was based on. I went as far as looking it up, but it's $2.99 which is a bit more expensive than I'd like to pay, what with being on this unofficial book buying ban and all, so I'm going to give that a pass for now. Still, I think the artist and the person adapting the text did a really great job and I enjoyed THE BACHELOR BID a lot. 9/10 would recommend.