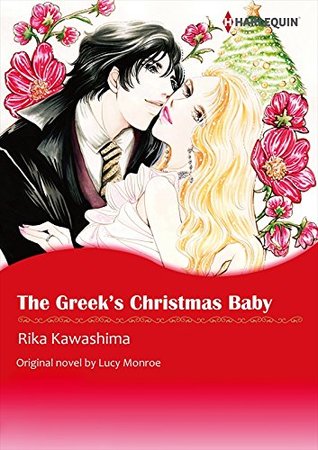 Nothing gets my blood running like a good old-fashioned amnesia plot. We never watched soap operas in my household and my mom didn't own any romance novels, so my only explanation for my utterly trash tastes despite growing up with an abundance of Jane Austen and Anne Bronte is that I was always a child prodigy for trashy things and now that I am exposed to these things, this talent is belatedly asserting itself.*

THE GREEK'S CHRISTMAS BABY falls into a category of romance novel I would summarize as "title explains it all." Harlequin is a big fan of spoilerific titles that act as concise summations of the story. They are legion, and they are interchangeable. Fun fact, while looking up this book title on Goodreads, I accidentally typed it as "The Greek's Christmas Bride" - and wouldn't you know it, that's a book, too. Is it also a Harlequin novel? Lol, of course it is, you darling fool.

Basically, Eden and Aristide are a star-crossed married couple (she being of humble origins, he one of those millions of rich Greek tycoons that make up 99% of the Greek population) on the cusp of getting divorced when they get into a car accident. Also, she's pregnant. The car accident gives him ~amnesia~ and his evil but sexy secretary has brainwashed him into thinking that Eden is cast in the mold of the disgraced family member that darkens the past of all of Aristide's family members, so he's like lolz, new wife who dis? and totally treats her like garbage because the evil secretary who literally spends all of her scenes laughing evilly must be totes trustworthy.

I didn't like this manga much at all, which is super shocking because amnesia subplots are my catnip. I just didn't really care about either of the leads. The hero is dumb and the heroine is one of those drippy, spineless types who doesn't fight her own battles or stand up for herself. She just cries a lot. Is this supposed to be a Christmas story? The art was also strange - props to Kawashima for having her own style, but I wasn't a fan. The mangaka also tries to cram too many panels in to a page, so they felt very cluttered and hard to read. Having the timeline jump around didn't help, either.

Sorry to say that this is definitely not a fave.