The Bride's Best Man by Takayama 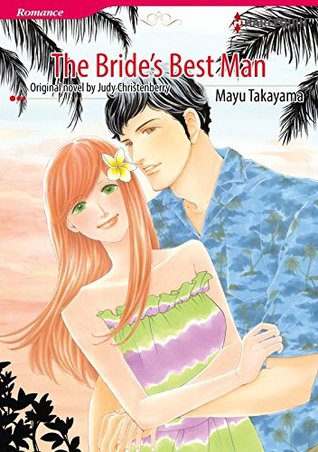 Whoops, I kind of sped through that in a single sitting but it was just that good. THE BRIDE'S BEST MAN is set on the island of Hawaii. Shelby lives with her Aunt Kay, who is young enough to be her sister on account of Shelby's mother having her when she was really young. Both women have a history of abuse and tragedy in their family and are trying to move past it. They have come to Hawaii to meet Aunt Kay's pen pal, "Dan." But to Shelby's horror, she's also being forced to meet someone too, Dan's protege, the good-natured Pete (shown on cover).

I was attracted to this book because of the bright, happy cover and because the couple on the cover actually looked cozy (as opposed to 99% of these covers, which could be an exhibition on aggressive domineering manspreading 101). The book lives up to the expectations. The art inside is really cute and super adorable. Pete is a beta hero who respects the heroine and goes out of his way to communicate with her and make her feel comfortable. What? I know, shocker, right?

The best part of this book, though, is the story. Shelby initially comes across as a jerk, but she's actually very introverted and has learned to shield herself from pain due to the abusive history in her family. Her mother was abusive and suffered from alcoholism and died young, and her father disappeared from the picture after they divorced. She was also the victim of attempted sexual abuse from her step-father, and her mother, the twat, blamed her for it. She's afraid of opening herself up to others and losing the people she cares about most, which is 100% understandable.

THE BRIDE'S BEST MAN is a great book and easily one of the best adaptations I've read so far. The story is great, the emotional development is great, and the romance is super cute. It's so refreshing to read about a nice hero who doesn't have to do a last-act grovel because he hasn't done anything wrong. If you are frustrated with d-bag male leads, you should check this book out. The only flaw is that sometimes the dialogue bubbles are awkwardly placed or formatted so it's hard to figure out who is talking, but apart from that, there was nothing about this manga I didn't like.