Trump Is F*cking Crazy: (This Is Not a Joke) by Keith Olbermann 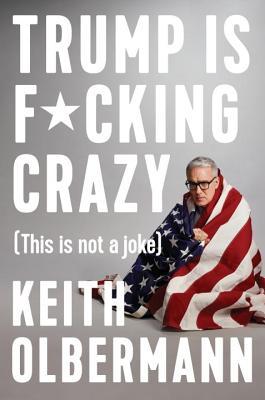 The title is self-explanatory.

TRUMP IS F*CKING CRAZY is adapted from Keith Olbermann's series, The Resistance, which can be found on YouTube if you're interested. I haven't watched it, but from what I gleaned, it's comedic political reporting in the style of Samantha Bee, intended to criticize the Commander in Tweets: DT.

I despise DT, so obviously one look at this title and I was down. Because, you know, as a liberal-leaning woman, I'm so deep in this echo chamber that all I can hear is the sound of my own "shrill" screaming.

You do know why we're repeating ourselves, though, don't you? Because nobody's listening. Or else they're pretending not to.

To be honest, I'm not sure which is worse.

I should note that if you are Team DT, you will not enjoy this book. If the news reports don't change your mind ("fake news") and the words of DT himself didn't change your mind ("locker room talk"), then this book is nothing but a single drop of "alternative facts" in the great lakes that compromise your cognitive dissonance. You're welcome to read it anyway, and probably should read it anyway, but I doubt it will make you happy. However, if you come onto this review with the intention of changing my mind or "sharing your opinion," you should know that I'm going to delete your comment and/or block you. I have zero interest in hearing your opinion, because I hear it from the man himself every g-d day, and it disgusts me. He is a despicable human being who is alienating our foreign allies while running this country into the ground and hurting the people in our society who need our help and protection and support the most, and if you support him, knowingly, despite every example to the contrary that says you should absolutely do otherwise, you're despicable, too. I stand by that.

Feel free to unfriend me over this. I no longer take it personally. I have a shelf of book reviews that have caused me to lose right-leaning friends (at this point, I'm not even sure I have any left - ha ha, "left" - but it's possible), and I'm always happy to add to it. I mean, talk about good advertising: "this book is so controversial, people will unfriend you over reading it!" I'd slap that on the front cover.

Back to this book - TRUMP IS F*CKING CRAZY knows its audience and caters to it with ruthless single-mindedness. I saw someone saying that it got repetitive after a while, and I must say that I agree. Up until about 275, I thought this would be a four-star read, but I lost steam around p. 300, and after that, I grimly skimmed the chapters until I reached the end. Olbermann is great at summing up issues and articulated many passing thoughts I had but couldn't fully express, but there's just so much going on with this administration that reliving it - again - left me feeling fatigued.

What alarmed me the most as I read through this book was how much of this I had forgotten. With new scandals happening every day, it's nearly impossible to keep everything in the forefront of one's mind. TRUMP IS F*CKING CRAZY begins during the election season, when Olbermann is certain that this clown is going to lose, and by the end, he's as bitter and jaded and angry and frustrated as all of us on the left, who are watching this demagogic, deceitful administration fan (either intentionally or inadvertently through great ignorance) the flames of hatred among our nation's most xenophobic, bigoted, violent extremists, whether it's condemning the NFL players peacefully protesting racial violence or ignoring Puerto Rico in the aftermath of a terrible national disaster, or initiating a ban that targets people not just on the basis of ethnicity but also on their religion... because one is not enough.

It's depressing, when you think about it too deeply, which is probably why most people don't. In fact, CollegeHumor just put out a video called "Now Is the Time to Do Something" that criticizes all the people sitting idly by, or acting like this is the very first instance in history where acts of injustice or incompetence have been committed on the administrative level. DT is just a symptom, not a cause. It's time for Americans to take a long, hard look in the mirror and decide for themselves what kind of a country they want to be citizens in... and why.