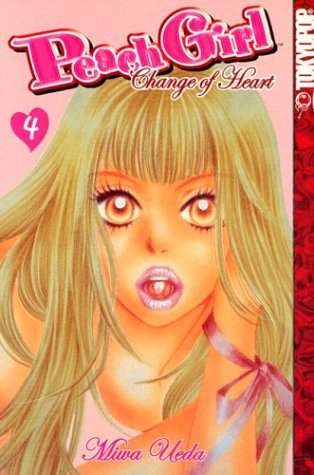 Peach Girl is strictly PG-13, though, even with the drama quotient being upped. Honestly, I think this is my least favorite book in the series so far and it put me off reading further because Kiley was such a jerk. I get that he had a first love, but the fact that he strung Momo along forever without discussing it with her really rubbed me the wrong way.

Toji has a lot of nerve lecturing Kiley about hurting people you love, considering how quick he was to leave Momo for Sae. He raised a good point (even though part of that point was his fist... in Kiley's face), but it didn't sound very convincing coming from him.

I do like the complexity of the relationships and characters in here, though, which is why I think I liked Peach Girl a lot more than some of the other manga I dabbled in at the time like Tokyo Mew Mew or... God, what else did I read... Fall in Love Like a Comic. A lot of manga characters are two-dimensional and have one setting: chipper quirky girl who occasionally bursts into tears during moments of emotional tension. The artwork in Peach Girl is gorgeous and really highlights what emotion a given character is feeling at the time, which makes it expressive and intense reading.

If you're a fan of shoujo manga, I do recommend Peach Girl. Just keep in mind that all the unnecessary drama can be annoying and practically no one is faithful.