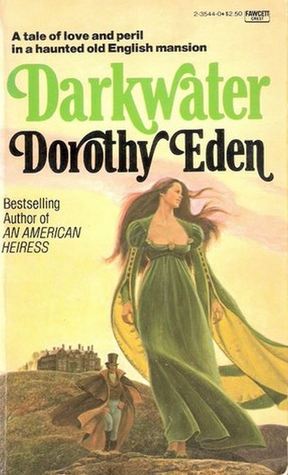 🎃 Read for the Unapologetic Romance Readers Halloween 2017 Reading Challenge for the category of: gothic romance 🎃

I really enjoyed this little book. Granted, my hopes were low. I'd looked through the reviews of DARKWATER and many of them were saying that DARKWATER was dull and flat, with a raging Mary Sue of a heroine who wouldn't STFU.

To my surprise, I found myself with a rather delightful Gothic romance written in the vein of such popular favorites as Victoria Holt or Patricia Maxwell (AKA, Jennifer Blake). Better yet, I got to buddy read it with one of my new Goodreads friends, Elena.

Fanny is the ward of some awful relations. Her uncle, Edgar, is an enabler to his cold and greedy wife, Louisa, and air-headed, vain daughter, Amelia. Much to the rage and annoyance of Louisa and Amelia, Fanny is far prettier than Amelia, the heiress, and is constantly turning heads despite being poor. When Edgar finds out he has two new wards to take care of, he's the only one who seems indifferent, even pleased. Louisa is annoyed and Amelia, disenchanted. Fanny is the only member of the family who truly harbors a soft spot for the young children, and despite having planned to use their pick-up as a chance to escape, voluntarily stays on in order to care for and nanny them.

I just want to pause here, and say that I often hate seeing children in fiction because they're either way too precocious and cutesy, or else used as plot points without much in the way of characterization. These children, Nolly (Olivia) and Marcus were incredibly well-written and actually acted like children (i.e. at times sweet, at other times, bratty). They added a lot of comic relief but they also stood on their own as characters. I also thought that Fanny's family was well done. Amelia was far from being the b*tchy, jealous rival... she had moments of thoughtless kindness, and even Louisa had some humanizing emotions. I felt like that made their dynamic so much more interesting.

The love interest, Adam Marsh, appears mysteriously (such is the way of the gothic romance) and leaves just as mysteriously. When he returns, he seems more interested in Amelia than Fanny (much to Fanny's devastating) and he strings Fanny along while cavorting with Amelia, which I really disliked him for. Obviously there is an explanation towards the end, but I so did not buy that.

Call me slow, but I didn't guess the perpetrator(s) until the very end. I wasn't trying to figure it out, though. I was reading DARKWATER in between reading Stephen King's IT, and this cozy mystery was the perfect balm for sleepless nights inspired by psychotic, murder-happy clowns. I just sat back and let the story carry me away, and found myself pleasantly surprised by the journey.

If you enjoy Gothic novels, this is a great addition to the collection. I want to read more Eden now!