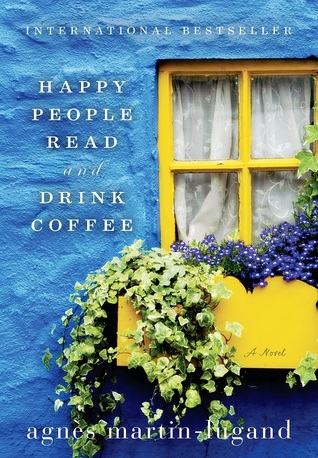 🎃 Read for the Unapologetic Romance Readers Halloween 2017 Reading Challenge for the category of: a romance where a graveyard is a major setting in the novel 🎃

I've seen some blatant false packaging before - I've seen Sarah Huckabee Sanders's press conferences - but this book takes the cake. The title and bright cover with primary hues make you think you're getting some adorable little chick-lit book that's probably set in either New York or Tuscany, about some woman in her early thirties who's "finding" herself.

What you're actually getting is a grim book set in France about a woman named Diane who has lost her husband and daughter in a terrible accident. She's obviously in a period of grief, but that grief appears to be turning to depression - she doesn't wash, doesn't go out, doesn't live, and it's starting to impact her life in a hugely dysfunctional way. The title of the book is actually the name of the literary cafe she ran with her husband before he died, and now it's falling into disrepair just like her.

One day, Diane gets this idea that she's got to go to Ireland. Her husband always wanted to go there, because he liked the cold, so she feels like this trip, in a way, will be an exile that punishes her for her family's death even further, while also bringing her closer to her husband spiritually. I don't like to use the word "crazy" but... man, this woman is pushing it.

So she gets to Ireland, where she rents a place, and her neighbors are some pretty friendly Irish people - except her grumpy neighbor who irrationally dislikes her for no apparent reason. They fight with each other constantly and he says the cruelest things to her, and even makes her so upset that she throws up and cries. And then... suddenly, she and this guy - who happens to be named Edward - has an abrupt personality change, and they decide they like each other, and oh, by the way, how did you catch that crabapple so quickly and how long have you been 37 anyway? A long time? Are you just saying that or are you actually a vampire who transformed to escape from dying of the Spanish flu?

I'm kidding. None of that later stuff happens. Except for the personality change, that is.

I picked this book up on impulse, and when I saw the average Goodreads rating for this book, I was like oh no. The first half of this book is so depressing, and the main character is such a sh*t, that you're torn between feeling sorry for her and kind of wanting to slap her because she's so annoying. That's how I felt about Alessandra Torre's THE GHOSTWRITER, so I think if you enjoyed that book, you might enjoy this one, too, because both are dark stories that feature unlikable main characters. When the romance finally comes along, it's dysfunctional, and the hero reveals himself to be a man who is spinally challenged when it comes to the hilariously OTT b*tchy OW.

I see this book was originally written in French and translated for the benefit of an English speaking audience. Perhaps the book is better in the original language. I always wonder about that, whenever I get a translated book that falls short for some inexplicable reason, or the "writing" in English is just bad. I did enjoy this story, despite everyone being jerks and the somewhat odd story. I think whether or not you will like this book depends on how great your jerk tolerance is.