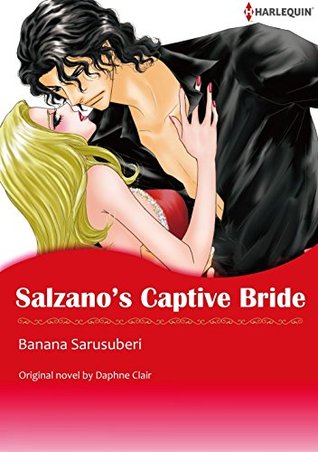 Hi, romance lovers! Great news! Did you know that Harlequin has republished some of its titles as manga? Until very recently, I didn't, either. I tried to find a news article about it, but the best I could come up with was a BBC News article from 2004 called "How Mills and Boon turned to manga comics." It's still somewhat relevant, but appears to be portraying these books as an exclusively Japanese phenomenon and that is so not the case now. I went into a comic book store just a few weeks ago and saw a couple of these puppies gathering dust on the shelf.

Honestly, the Harlequin/Mills & Boon novels translate pretty well to manga format. Shoujo/Josei manga tends to follow a simple storyline that is made complex through characterization, emotion, and various unexpected twists...just like Harlequins. The art work in this particular Harlequin manga, the cringe-worthily-named SALZANO'S CAPTIVE BRIDE, is especially vivid and lovely, and reminds me of Miwa Ueda's PEACH GIRL (one of my favorite shoujo manga series, even if it is a total soap opera).

The plot of SALZANO'S CAPTIVE BRIDE is pretty simple. It's about two sisters who live in Auckland, New Zealand. One night, Amber wakes up to find this Venezuelan dude named Carlos busting down her door. After yelling at her and manhandling her, she finds out that he hooked up with her sister, Azure (cringe), and Azure became pregnant from their one-night stand. Azure was currently "off" with her then-boyfriend and fearing the thought of raising her kid alone, sent Carlos a letter demanding money. Now that she's back together with her boyfriend, Azure doesn't want to do a paternity test or have anything to do with Carlos, because she thinks it will wreck their family.

So Carlos makes Amber a deal: he wants an heir, and he'll leave Azure alone and drop the paternity suit if she agrees to marry him and pop out a baby for him in Azure's stead. LOLwhat.

This is a romance novel, so obviously Amber falls for Carlos despite this terrible arrangement. He takes her to his love nest - I mean, mansion - in Venezuela and introduces her to his large, perfect family. The book is pretty short, and the vast majority of the scenes are about sex, preludes to sex, or emotional declarations pertaining to the two former. Also, babies. Carlos is definitely an alpha, but he isn't rapey (sexually agressive, yes but there is no dub-con, here). In fact, he explicitly says that he's willing to wait until the heroine is ready and she's the one who asks for it/makes the 1st move.

I really enjoyed this book. I bought it for myself as a fun little present because I was feeling sick last night and couldn't sleep. I loved the art work and the storyline was entertaining and easy to follow. I would definitely read more of these Harlequin manga. I've actually got my eye on one by Junko Okada/Lynne Graham that looks AMAZING: it's called THE SHEIKH'S PRIZE, but at nearly $5 for just over 100 pages it's a bit out of my budget. Let me know if it goes on sale, ASAP. Deal?

P.S. This is published Japanese-style, so yes, it is read "backwards," from right to left.