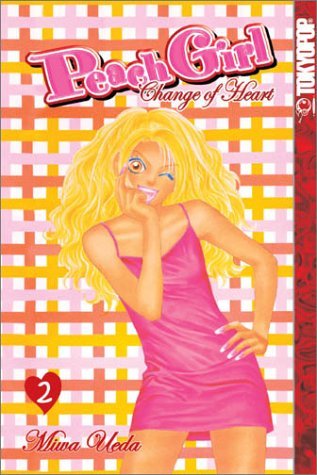 I forgot that Sae's magic super power is turning into 2D/paper.

The nostalgic adventures continue with Peach Girl, aka Momo. Kiley's ex-girlfriend, Morika, is back in the picture, which makes Momo jealous. On the other hand, Kiley's brother, Ryo, is getting pretty cozy with Momo... and despite Kiley's numerous warnings that Ryo is dangerous, Momo doesn't see the harm in him.

There's so. Much. Drama.

I forgot how rapey these books are. Also, the violence in here is so casual. People getting punched. People getting stabbed. People getting picked up and thrown wrestling style to the floor. And this is a graphic novel for girls (who says that girls only read "wussy" stuff, anyway?). That's not even counting the numerous death threats/physical threats Momo gets from Toji and Ryo's fan clubs.

That's right. Fan clubs. I guess popular boys in Japanese high schools are just a step removed from One Direction. I've read a lot of shoujo where the popular cute boys have "fan clubs": it's getting to the point where I'm beginning to wonder if this is actually "a thing."

Reasons why this book is awesome:

1. I always thought Ryo was hot. He's basically a bodice-ripper hero placed smack-dab in the middle of this shoujo manga. He's rapey and a little bit psychotic, but I like my antiheroes in my fiction (and not in my reality) and he certainly fits the bill when it comes to villainy. You know, for kids!

2. Speaking of kids, I love that BDSM-y splash panel on the first page where Momo's in the leather handcuffs and Kiley's wearing a chain. Some of these splash panels are hilariously racy (like the covers). It makes it seem like these books are way more sleazy than they actually are.

3. I'm still not quite over Sae's magical abilities to transform into paper.

4. Usually anime/manga villains seem like they wouldn't be able to scheme their way out of an open door, so it's refreshing to see characters that are actually (somewhat) convincingly two-faced.

I'm still enjoying this series. So far, it lives up to how I remembered it at seventeen: trashy but fun.