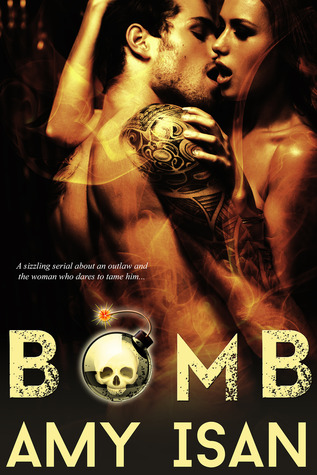 I am fundamentally averse to the idea of MC romances because I just don't find the idea of a bunch of leather-bedecked bearded dudes on Harleys attractive - especially not if they refer to said Harleys as "hogs" and throw around F-bombs the way a creepy dude with a front-row seat throws dollar bills at a strip club. I'm honestly confused about how many women find the idea of this attractive. Billionaires, I understand - but bikers... I've never seen a charming biker. Or an attractive biker. Most of the bikers I've seen are dudes in their forties with bushy beards and dirty leather jackets who ruin nice summer days by revving their g-d engines.

So why did I read this? I lost a bet. Well... no, MC romances are a category on this romance challenge I'm doing, and since everyone else had to suffer through bodice rippers and sheikh romances, it seemed only fair that I encounter my worst nightmare too. Plus, it was free. And only 100 pages. I figured hey, it's short - if I hate it, I only have to hate it for about 1/3 as long as I would a novel.

Cassie hates her job and her boss and her stupid life. I could just picture her in my mind as that over-entitled, lazy, flaky person we all know who thinks they deserve more than they have but doesn't want to work for it. Case(s) in point she's late for work all the time and lies about why, and is super judgy of her roommate because she can't get any.

When she witnesses an accident involving a motorcycle (I can't remember if she was at fault, and I do not care), she crosses paths with Logan, AKA Bomb. And since he's mostly referred to as "Bomb" in this book, it took me a while to figure out that Logan = Bomb. He's not thrilled when he finds out Cassie called the police because his MC gang is into some shady sh*t, so he goes through her purse and takes her driver's license so he knows where she lives now.

When Bomb shows up at her door, waving her license tauntingly, she debates about whether or not to let him in. Literally - this is something she asks herself. And guess what? GUESS WHAT?

She lets him in.

For a short, this doesn't have much sex. The characters don't get together until the very end. Most of it is Cassie whining about her job and obsessing over this guy she doesn't know, and Bomb doing shady MC sh*t and thinking about how much he wants to have sex with this girl he doesn't know. The sex scenes are terrible, and at one point the heroine thinks to herself "I want to taste his soul."

I won't be picking up any of the other books in this series, but at least I've checked MC romance off my list.