I Was Dora Suarez by Derek Raymond 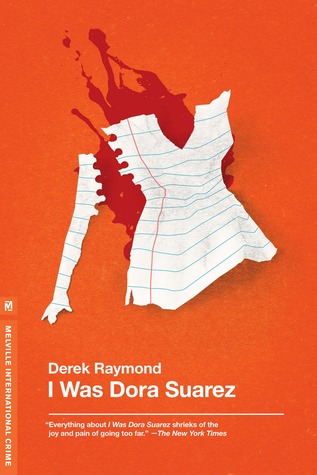 My sister gave me this book, with the preface that it was so disgustingly graphic that it allegedly made one of the publishers who read it vomit in his office. I wasn't sure about that, but it's listed under the book's lore on Wikipedia, so who knows? It's a bit like the tales of the paramedics who were called to screenings of the Exorcist (1973) because audiences were fainting in terror: whether these stories are true or not, it's good publicity.

I WAS DORA SUAREZ is certainly violent. It is a story of a young woman who is violently killed by an axe-murderer. The nameless detective sergeant is puzzled, because a journal left behind by the victim reveals her to be a very troubled and unhappy woman who was already dying of AIDS. What was the motive? What follows is a grim chase in which the police look for a disturbing man who has compensated for his impotence with sexual self-flagellation that can only find release in murder.

The detective sergeant is your classic "Tough Guy." Quotes added, because he's tough in the same way those obnoxious brostanding dudes in bars are tough. You know the ones, who keep saying, "Wanna go? You wanna go?" The detective sergeant is constantly threatening everyone around him, just to prove who's really in charge, and scoffs at the idea of doing anything by the book. I'm sure any real police officers who read this book would hate this noir Neanderthal. I know I did.

What redeems him a little is his utter faith in Dora, the victim. Even when it's revealed that she had AIDS - in a time when AIDS was a mostly unknown and panic-inducing disease - he feels no revulsion for her at all, only compassion and a strong desire to bring her some small amount of posthumous justice. Even when it's revealed that she's a prostitute, he doesn't care. He gets angry at his colleague, when he suggests that such a fate might have been inevitable.

Suarez was killed because she was beautiful, poor, sick and at our mercy, and we showed her none, and may our country hang its head (168).

I wouldn't say this book is necessarily vomit-inducing - I managed to read it while eating chips and drinking a beer - but it is quite disturbing and if graphic sexual and physical violence disturb you, I would not recommend this to you at all.

Reading this actually made me think of a friend - I know, that's the last thing friends want to hear, right? "I was reading this book about a serial killer and thought of you" - because she used to love dark stories like these, whether they were captive romances, old school horror, classic noir, or just experimental graphic-novels and she was actually one of the first people I thought of when I was wondering who else might appreciate this mystery. Sadly, I don't think she's on Goodreads anymore.

Anyway, this is why I like it when people gift me books - they usually aren't things I would ever pick out for myself but sometimes I end up enjoying them, regardless.