Beyond Heaving Bosoms: The Smart Bitches' Guide to Romance Novels by Sarah Wendell 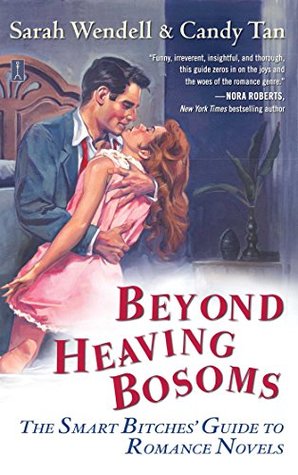 I love romance novels - a lot. I'm creator and moderator of a romance group called Unapologetic Romance Readers, a promotional-free group involving critical discussion of popular and not-so-popular romance titles. In a given year, I probably read between 100-200 romance titles alone. I buy them in public and in private, I read them on the bus. I love romance novels, and I don't care who knows. The Smart Bitches obviously feel the same way. I've been following their blog for a while, and they have some of the best reviews of bodice-rippers I've ever seen (some of their Johanna Lindsey and Fern Michaels reviews have moved me to tears... of laughter, that is). When I found out they published a book, I was all over that like white on rice. (As of now, it's a steal at $3.99, so I say grab a copy - at one point, it was $9.99.)

Published in 2009, BEYOND HEAVING BOSOMS is already dated because it was published before FIFTY SHADES OF GREY made erotica mainstream (for better or for worse) and before new adult titles because The Next Big Thing (again, for better or for worse). In a way, this makes for an interesting retrospective, because many of these ladies' predictions were true: that erotica would become less taboo, and that LGBT+ romances, and the increasing demand for them, would create a drive for more titles, more scenarios, and more representation (which it did, although there is still room for improvement, particularly with F/F, asexual, and transgender representation).

BEYOND HEAVING BOSOMS resonated with me on multiple levels because most people - especially women - who read romance have had to deal with people who feel the desperate need to take the piss out of their enjoyment. I've had people come up to me, and tell me that they thought romance novels are stupid. One man saw a vintage bodice-ripper in my hands at a thrift store and bragged about how dumb he thought they were, and their only redeeming value was in reselling autographed first editions for big bucks at swap meets. I have people who continually comment on my book reviews and say, "Why are you reading this? This sounds so stupid. I would never read this." Which... good for you, I guess? I'm not sure what these people's goals are in bragging about their disdain of romance. What do they want? A shiny gold star that says, "I made someone else's day slightly sh*ttier while touting my own intellectual superiority?"

There's a lot of jerks on the internet, so this isn't entirely a romance-exclusive thing, but the reason romance readers are so tired of hearing about how dumb romance novels are is because it's the only novel that's written mostly by women, mostly for women, and given the inherent sexism that still plagues many institutions of society (yes, including "Western" society), it seems a little fishy that romance receives criticisms ("the plots are all the same", "there's a lot of rape", "the characters are so bland", "the covers are stupid", "it promotes unhealthy relationship standards") that are supposed to be unique to romance and yet could just as easily be swapped out for criticisms of mystery, science-fiction, action-adventure, and horror novels. The only difference? Those latter genres aren't being exclusively marketed to and written by women. So yeah, it seems just a  little sketch.

What makes romance criticism even more aggravating is that many of the critics are people (often men, but not always) who picked up a bodice-ripper once, in the 70s, or flipped through Twilight "once, to see what all the fuss was about" and are using that as their yardstick to judge all romance ever, thereby contributing to the stereotype that all romances are created equal and are therefore interchangeable. Even in historical fiction there's a lot of variance, and bodice-rippers are in no way representative of the genre as a whole: they have branched out considerably from their clothing-shredding roots since the debut of THE FLAME AND THE FLOWER.

I can see the anti-feminists side-eying this book, and no, even though the bulk of this book is written with the feminist, forward-thinking woman in mind, it's not all "waaaah, someone told me the book I was reading was dumb." BEYOND HEAVING BOSOMS offers a heavily satirical look at the books we all love to read best, pointing out the flaws, but tenderly; they manage to poke fun at romance novels while at the same time, making this humor a celebration of the wackiness of the books, as well as an appreciation of what they offer for women, be it escape or even empowerment.

The last part of the book is written "choose your own adventure" style and really serves to highlight how unhealthy and ridiculous some of the tropes in romance novels would be in real life, and yet somehow makes them hilarious and endearing. It's followed by a "mad libs" style game that does the same thing with purple prose. Again, this never feels mean-spirited. Not like those "why are you reading this?" type comments that seem to suggest that only silly women-folk with their simpering, inferior brains would pick up something to read that was so demeaning. No, this is fine parody, and feels more like a heavy wink than a backhanded slap.

I would love to see the Smart Bitches write a follow-up to this book, since romance has changed so much in the eight years since this was published, and I'd love to see their reviews of the POC rep books that are slowly trickling into the market in greater numbers, as well as college romance, mainstream erotica publications, and that mutated black sheep in the romance family... monsterotica, "Tinglers," and dinoporn. I found myself adding so many books to my to-read list while paging through BEYOND HEAVING BOSOMS, even some of the more WTF Old Skool titles (I love me some Old Skool titles, the more the covers look like pastel soft-core porn, the better).

There was only one glaring mistake that occurred on page 112 of the Kindle edition, and that was when the authors said that Anne Stuart's MOONRISE had a hero who was a cult reader. She's actually confusing MOONRISE (which has a CIA hero) with RITUAL SINS. I double-checked to make sure, but I'm very familiar with RITUAL SIN's premise, because my friend Heather Crews keeps trying to persuade me to read it because it's right up my dark and twisted Old Skool alley.

If you love romance novels at all, you should read this book. It's an ode to the genre, as well as a parody, and achieves a nice balance between the two. If you're not a fan of romance, you might not enjoy this quite as much because the book is written for an audience that is familiar with most big-name romance authors and romance cliches and romance tropes. You might still have a laugh or two (or three, or four), but I think some of the jokes and references might go over your head.