Just Haven't Met You Yet by Cate Woods 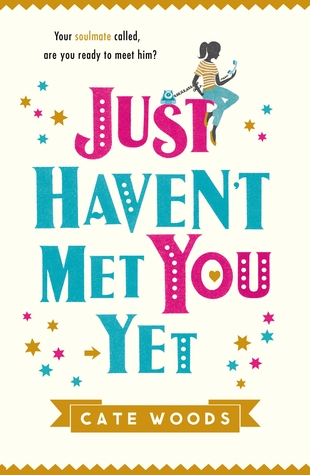 For the most part, I don't like Sophia Kinsella/Wendy Markham books. Something about her heroines put me off, and for the longest time, I couldn't quite put my finger on what it was. Then one day I realized: all her female heroines lie like they breathe. They lie over unimportant things, lie whenever they're cornered, lie to avoid conflict, lie to avoid solving problems. Lie, lie, lie. They take pathological lying to the next freaking level.

And you know what reaaaaally annoys me about that?

The way it's written, you can tell that we're supposed to find these liars so quirky and adorable and awkward. "Oh no, Ella Pants-on-Fire is afraid her boss is going to find out who released confidential information to the competitors, so she lied and said an angry mime did it. How funny! How awkward! How quaint!"

JUST HAVEN'T MET YOU YET features a heroine, Percy James, who could be fresh out of a Sophia Kinsella/Wendy Markham. She's in her twenties/thirties, with relationship issues and uncertain prospects (typical) and desperately wants to achieve happiness. So how does she do this? Lies on her CV to an interviewer to make herself more interesting. Lies to her boyfriend about where she's going and who she's seeing (she's actually going on her date with her alleged "SoulDate"). Lies to her SoulDate about not just whether she's single, but also that her mother has Malaria.

The plot is interesting and was a huge reason behind why I wanted to read this. Percy receives an invitation from an online dating company that claims to use browsing and consumer data to match people with their SoulDates - all the sites you visit and the ads you click are factored in to determine your personality and interests and, from there, your ideal match.

The problem is that Percy already has a boyfriend - a long-term boyfriend who she's about to move in with and who she's practically engaged with. Her friends caution her against the SoulDate idea (sort of - some are less opposed than others), but Percy eventually decides to do it... only, when she meets who her SoulDate actually is, she's surprised as all get out.

I felt really bad for Percy's boyfriend because he's my type of guy - you know, socially awkward, old-fashioned type. I felt like she treated him really badly. And yes, on the one hand, I get it: you can't stay with someone just to make them happy if you have no feelings at all, but you also can't just drop people like garbage. People have feelings. They aren't disposable. Percy treated romance like this thing she felt she was entitled to, and all her potential love interests in this book were just pieces that would help her to her end goal of having her happiness, and to hell with whatever they wanted.

Also, while I appreciated how one of the characters questioned her sexuality, I found it annoying how badly that was handled, too. I thought one of the other characters raised a fantastic point: you can't just use people as experiments to figure out what your sexuality is - especially if you aren't up front about the fact that you're questioning. Etiquette for LGBT+ couples is exactly the same as it is for straight couples: if one person is expecting a relationship and you're just "experimenting," for God's sake, say so up front so the other person can refuse, while fully informed, if that's not what they want.

This book annoyed me quite a bit. I couldn't put it down - I was oddly fascinated by the repulsive main character's shenanigans - but I didn't really like her as a character, and her constant lying and manipulation really got on my nerves. I think if you like Sophia Kinsella/Wendy Markham, you will like this author, as their styles are similar. Otherwise, though... no.