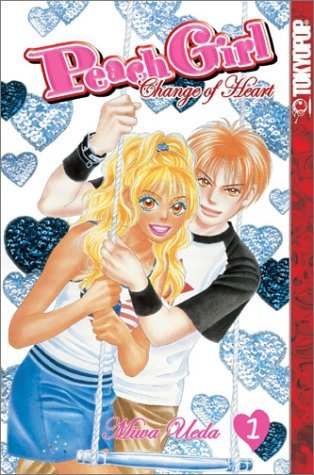 This series was the shit when I was in high school. Screw Team Edward vs. Team Jacob - I was all about Team Toji vs. Team Kiley (and for the record, I was Team Toji, although being a fickle high school student, I often vacillated between the two depending on what plot contrivance was currently in the mix).

Momo (which means "peach" in Japanese) is on the swim team and because of her darker skin and bleached hair, a lot of people assume she's a "beach bunny" or a slut. She's bullied ruthlessly by her jealous female peers and all the dudes think they can get into her pants. After her first love betrayed her to go out with her BFF (best frenemy forever), Sae, Momo ends up with Kiley - a not-so-reformed player who might be carrying a torch himself.

Reasons why this series is awesome:

1. The clothes. It's an ode to early 2000s U.S. fashions (or I guess, late-1990s Japanese fashions, which we then stole). Girls in my high school dressed like this. I even had a few of those beachy-looking shirts with obnoxious logos emblazoned across them and I had a denim mini-skirt just like Momo is wearing on the cover of this manga. #TBT

2. The mean girls. This series came out before Mean Girls did, and Sae makes Regina George look like a girl scout. She is the OG Mean Girl. Her shenanigans are so malicious and over the top, and yet she's so self-conscious and needy herself that you almost feel sorry for her. ***Almost***

3. Momo herself. She isn't as helpless as some shoujo characters. She punches people a lot... which, okay, I guess is fine and not suspension-worthy in manga-land. But she doesn't just accept her bullying as her due, the way Tsukushi from Boys Over Flowers often did. She fights back.

My favorite character in here is probably Misao though because she looks and dresses like I do, and I love the fact that she's no-nonsense and curvy and respected. Momo was who I wanted to be, but deep down I always knew that I was a Misao and I was totally okay with that because #MisaoRocks.

I hope I've sold you on this manga. It's vastly underrated. I've even watched the K-drama!