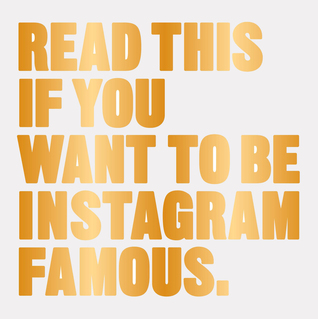 I picked this up because of the title, because everyone is always talking about internet celebrity, and I was curious: what is the secret behind this fame? Is there a shortcut? Obviously, I was skeptical because there is no way in hell anyone would divulge all the secrets behind their fame and risk not only getting dethroned but also losing ad revenue to competitors of their own making. Books of this type are usually more similar to Pinterest inspiration boards, paired with vague, common-sense sounding advice that tends to conflict with itself if you look at it too closely ("be unique" - but also "be homogeneous/consistent!"). Um, yeah. To quote Ace Ventura, "Spank you, Helpy Helperton."

I have an instagram. I basically use it the way this book tells you not to use it. I'm over ambitious and over enthusiastic in what I like to share. Sometimes, I'll take book posts. I have a few #ootd posts, when I'm feeling fly (somewhere, a hipster just cringed). I document all my trips abroad, but also take pics of all the cool stuff I see locally in San Francisco, whether it's a tasty salad (yes, I do take pics of my food) or political graffiti or a protest that I'm participating in. I tried to make it author-geared once, and it just didn't work out. I felt annoying, repetitive, and fake. Maybe part of that celebrity is owning your self-hype and making it work, but I just felt like an obnoxious door-to-door salesman pushing my book on people.

To be fair, some of the pictures in here were really cool and even artistic. Some of them were also self-promotional and seemed to embrace the culture of conspicuous consumption that's so prevalent on insta ("look at this expensive makeup I'm using - buy it all, and don't forget to use my product code so I get a cut!") ("I bought the hardcover limited edition of this popular book, and that makes me a more worthy and hardcore fan than you cheapskates who only read it on Kindle"). I guess what I take issue with is when does it stop being an expression of one's individual sense of artistry and authentic expression, and when does it start becoming a corporate entity masquerading as the former?

Just something to think about.