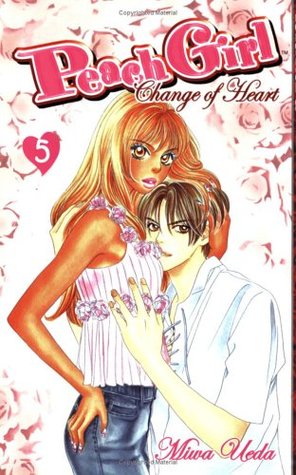 Reading this book made me so nostalgic for the convenience stores in Tokyo. American convenience stores have a reputation for being dirty with greasy, unhealthy food. The ones in Japan, on the other hand, were amazing, serving things like uji matcha ice cream, whole bars of fresh tamago, soft cheeses (they were delicious!), imported chocolate, and all sorts of other amazing treats.

This was a fun surprise! I actually had never read volume 5 of this series before... I've read books 1-4, so those were all rereads, but this was completely new! When I got tired of my manga, I gave it all to my younger sister and it's from her that I'm borrowing these books for my little nostalgia bender. She actually enjoyed Peach Girl so much that she went out and bought the other books in the series to supplement what I hadn't given her. High praise!

If you thought Ryo was hot, like me, you will probably hate him right about now, like me. Nothing about him is at all appealing about him to me anymore as a character. He's just an awful person who does awful things to women and I can't stand his character. He's exactly the type of opportunistic misogynistic that's been making headlines in America far too frequently these days.

Honestly, this book was all about Sae - and I actually really liked it. Ueda took her character development in a great and surprisingly thoughtful direction. It made me think about how we all say at one point in our lives how we wish that someone who wronged us will "get what's coming to them." What we mean is that we want them to hurt as we have - or worse. That they deserve this pain because of karma. Well, Sae finally "gets what's coming to her"... and it made me sad. I didn't think that I could feel bad for Sae, but I did. I felt really bad for her.

That resolution, though? Beautiful.

I'm not happy with the cliffhanger ending though. This series has been brutal when it comes to cliffhanger endings and the drama between Kiley and Momo is reaching a fever pitch. I'm not sure how much more "will we / won't we?" I can take, but pretty soon I'm going to be rooting for Toji again, or even Gigolo/Goro. I'm especially not happy because Kiley - ONCE AGAIN - acts like a total tool. I believe the common parlance is "f*ckboy." Well. That is what he is.