Portrait of M and N, Volume 1 by Tachibana Higuchi 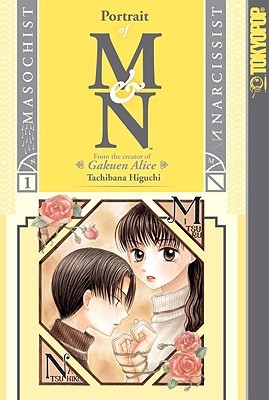 This is what happens when you buy all your manga secondhand: you end up with really popular books that everyone has read and really weird books that nobody has read. PORTRAIT OF M&N doesn't even have an English summary on Goodreads, and hardly anyone has read it at all compared to the author's far more popular series, Gakuen Alice.

PORTRAIT OF M&N is probably one of the strangest stories that I have ever read. It's about a girl named Mitsuru and a boy named Natsuhiko. Both of them have dark secrets and connect over an incident that reveals both their dark secrets.

Mitsuri was forced to leave her last school due to a scandal. She is a masochist who is sexually aroused by beatings because her mother beat her when she failed as a child, so beatings make her feel "safe" and "valued." When a kid at her old school hurt her by accident, she came onto him and begged him to hurt her more, much to her family's chagrin. The same thing happens here, with Natsuhiko, only instead of freaking out about it, he feels... well, awkward but mostly chill, much to Mitsuri's surprise.

Mitsuri looks like an awkward, nerdy kid, but without his glasses, he's actually supermodel gorgeous. Clark Kent syndrome, I guess. His dark secret is that he's attracted to his own reflection, like Narcissus, and enjoys gazing at himself in a trance-like state. He also had a scandal at his last school. The most beautiful girl in school hit on him, and he agreed to go out with her because she was his "rival", or equal when it came to looks. But when she came to his house and saw all the mirrors, as well as the shrine he had built for himself, she freaked out and told everyone how stuck-up and perverted he was. Now he wears coke-bottle glasses of a strong prescription so he can't see how attractive he is while also hiding his good looks from other people.

The story is basically these two trying to keep other people from guessing at their issues while avoiding the bond they feel for one another out of shared "hardship." Tension arises when one of the other boys finds out Mitsuri's secret and I thought for sure that this kid was going to turn out to be a sadist or something - but no, he has a dark secret all right and it's not what you would expect.

PORTRAIT OF M&N reads exactly how you would imagine a young adult story about sexual fetishes would read like - awkward, watered down, and... weird. There's another short story called "A Girl in a Bird Cage" at the end, which seems like the textbook example of an abusive relationship at first. By the end... well, to me, it still felt like the textbook example of an abusive relationship but I think the twist at the end was supposed to make it seem sweet. Um, no, still weird and uncomfortable.

I'm giving it three stars because I found it morbidly entertaining in the vein of 70s bodice rippers and pulpy horror novel from the 80s.