The Night She Won Miss America by Michael Callahan 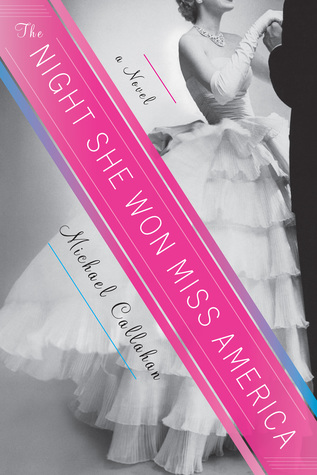 THE NIGHT SHE WON MISS AMERICA is "loosely" based on a true story, and written by an author who is an editor at Vanity Fair. (It's funny that he's actually a journalist, because I was thinking to myself that this has the spare, matter-of-fact style of writing you see in books like THE IMMORTAL LIFE OF HENRIETTA LACKS.) When I read the summary, this didn't seem like something I would normally pick up for myself, but I really loved the cover and the prospect of a beauty pageant derailed by scandal was just too great to resist.

THE NIGHT SHE WON MISS AMERICA is set in 1949. The heroine, Betty Jane, is blackmailed by her mother into signing up for the pageant. She doesn't expect to make it to finals, let alone win, but obviously...she does. It's all terribly exciting for a girl who comes from Delaware, and she is dazzled and excited to find out that the male escort selected for her is as handsome as a movie star, and falls for him instantly.

What follows is a whirlwind romance between Betty Jane and Griffin, as Betty rises higher in the ranks of the competition. There's just one small hitch in her happiness: Griffin tells her that if she wins, he won't have anything to do with her anymore: that he doesn't want to be known as "Ms. America's Boyfriend." Betty Jane doesn't take him seriously, but when she wins, and he's more than ready to call her bluff and leave, Betty Jane is forced to give up her crown and abscond with him -

The only problem? Griffin has paranoid schizophrenia.

The moment I realized what was going on, I'll admit that I held my breath. Mental illness is often demonized in thrillers and horror novels, and schizophrenia especially gets a bum rap. Callahan does treat Griffin's character with care. Yes, he's scary, but the reader feels sorry for him - especially since this was written to characterize a time when mental health treatments were still in their infancy, and what was available often fringed on cruel and unusual. Griffin is a tragic figure, instead of an evil one, and as he slips deeper into his episodes, the book winds to its devastating finish.

The end of the book is so different from the beginning of the book in tone that it's almost like two separate stories. The first story is a small town girl making friends and enemies as she competes against girls who can be catty, sneaky, encouraging, and friendly by turns, all of them knowing that only one can win. It has a fun, snarky chick-lit vibe to it that I really enjoyed. The second story is about a doomed romance founded on instant attraction between two young characters. Also, in the background, set in the modern day, is a reporter who is determined to hunt down this isolated woman who was involved in some great scandal...hmm, I wonder who that was.

Overall, I thought THE NIGHT SHE WON MISS AMERICA was a pretty good book. I can see why it has low ratings, because the story is inconsistent in tone, but I thought the writing was quite good and the story kept me entertained, and the book went by rather incredibly quickly. If you enjoy reading about beauty pageants or tragedies (or both!), I think you'll enjoy this one.