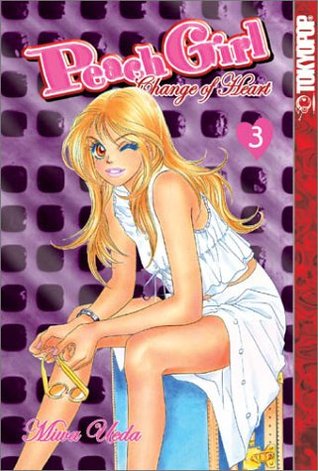 I love Momo's outfit on the cover of this one. If it was a solid dress and not a midriff-bearing two-piece, I'd totally wear that!

The Peach Girl saga gets even weirder in this installment. Ryo continues to outdo himself in the rapey psycho department. Sae is determined to sleep with every guy Momo likes just to brag about it later. Kiley reenacts Katy Perry's "Hot N Cold" song with Momo, trying to get into her pants one minute and then avoiding her in school like she has the plague the next.

1. There are some weird messages when it comes to sex in this book, but I love how quickly Kiley came to Momo's defense when she wondered aloud if she was somehow at fault for all these men trying to attack her. He says, basically, "No! Don't think like that. You're the victim! They attacked you!"

2. On the other hand, there's this weird "honor among manwhores" thing going on here where both Ryo and Kiley "can't sleep with the one they love." Whatever that means. #RomanceLogic

3. Misao gets more of a role in this book, which makes me happy because I love her. She's such a great character - feisty and a little troubled, but also very intelligent and strong and caring. Momo's like that, too. She stabs a would-be attacker in the head - with a pen. Can you say bad-ass?

4. In addition to turning into paper, Sae can also turn into a balloon. Is she the forgotten Wonder Twin?

I'm trying to remember how I felt about this book as a teenager, and I remember thinking Ryo was hot (because I was dumb) but also really liking Toji. Now, I think I like Kiley more. He always has faith in Momo, and takes her at her word. Toji, on the other hand, feels "weak" to me: he let himself be blackmailed by Sae and now he just lets her push him around in their relationship while mooning after Momo. It's hard to like someone who doesn't stick up for the heroine when she needs him most.