Prince of Magic by Anne Stuart 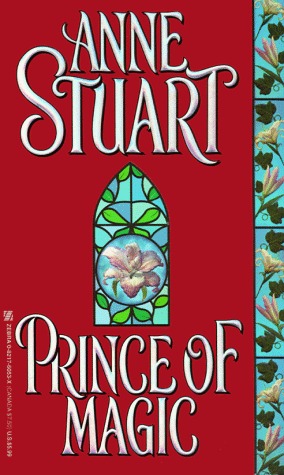 Okay, so here's the thing. All Anne Stuart books are basically varying degrees of sameness. There's always the prudish and possibly tortured, but still determined heroine who meets the mysterious and possibly evil, but still ultimately noble hero amidst some sort of sinister backdrop of nefarious circumstances. The hero probably seems like he's going to be the villain for a while-- and sometimes he even is-- but there's always some greater evil that makes him realize that, sigh, he has to abandon his nihilist ways to care about something, so it might as well be her, I guess.

This is literally the formula in every single one of her books-- and to be honest, I don't even care, because when it works, I love it. Unfortunately, not all Anne Stuart books are created equal. I actually think, for the most part, her older historical romances are the best. PRINCE OF MAGIC is one of the really good ones, and it comes across as kind of being like a cross between LORD OF DANGER and RITUAL SINS.

Lizzie is forced to leave Dorset after shaming her family by being caught dancing in the woods in her underthings, thus terminating her engagement with a hypocritical lecher and earning her family's scorn. She's sent to live with a cousin who lives in this idealistic woodsy town with a crumbling abbey and a sinister forest. The cousin's family consists of a prudish aunt and uncle, her good-hearted cousin Jane, spoiled twins named Edwina and Edward, and the mysterious Gabriel, a recluse known as the Dark Man who lives in a tower.

Gabriel used to be a monk but then he became more interested in druidism and paganism, much to the interests of the pathologically sadistic couple, the Chiltons, who have a rather, ahem, incendiary plan for Beltane. Gabriel thinks they're idiots who are basically just using the trappings of a religion they don't understand as window dressing for their own debaucheries-- which is actually excellent and still-relevant commentary on cultural appropriation that continues to happen to this day to Native and Eastern religions-- but anyway, he's basically doing his best to stall and rebuff them, while still holding on to his "I don't care" mentality, but obviously, this being a romance novel, that doesn't work.

The villains in this book were appropriately twisted, as befitting a book that has cults and ritualistic sacrifice. There were scenes in this book that gave me chills, and the climax was like something out of a horror movie. I also actually really liked the secondary romance. Anne Stuart includes a lot of those in her books and sometimes they take up way too much page time, but I actually loved Peter and Jane almost as much as I loved the main couple. The forbidden romance, high stakes, and sense of danger really added a lot of spice to the romance, and the sex scenes were hot. Plus, there's a heavy Gothic atmosphere and two rather hilarious ghosts. I ended up loving virtually everything about this.

I think I have a new favorite Anne Stuart book to grace my god-tier romance list.