The Lost Duchess of Greyden Castle by Nina Coombs Pykare 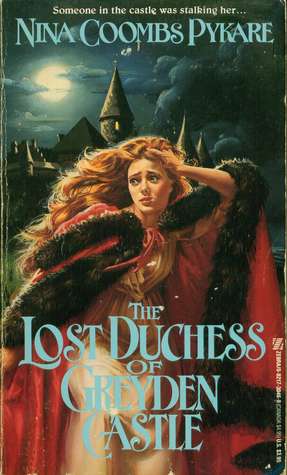 A while ago, I found out that a bunch of old school gothic romances had been released to Kindle, so I snapped a couple of the more interesting ones up. Right now, I'm not feeling super well, and one of my go-to reads when I'm feeling poorly is the gothic romance. I'm not sure why, but something about crumbling castles, terrified governesses, creepy children, cursed families, and mist-tossed moors always make me feel better.

THE LOST DUCHESS OF GREYDEN CASTLE is a pretty crazy little book. Basically, Vanessa is the younger sister to a beautiful blonde woman named Caroline. She sort of falls in love with this duke named Richard when he comes to their house to take Caroline away. Five years later, her sister dies, and Richard comes back and is like, "Hey, your sister's dead and I need a mother for my child, marry me." And Vanessa is like HE'S IN LOVE WITH ME! I DO! Because she is dumb.

Right away, it's clear that things at Greyden castle aren't right. Richard has an identical twin named Roland and they seem to hate each other. Richard's sister, Rosamund, has gone mad because she thinks their father paid someone to kill her impoverished fiance. Pregnant out of wedlock, she also has a sinister emo boy son named Penrose who idolizes Lord Byron (as one does). And Caroline and Richard have a child as well, a little girl named Sarah, who will do anything to make Vanessa love her. Oh, and let's not forget the creepy old disapproving dowager, whose sole purpose in life now seems to be to stir the pot.

I'm sure you thinking, THIS FAMILY IS CRAY-CRAY. And you would not be wrong. And of course, it isn't long before the death attempts start. Screams in the night, beaches full of quicksand, and old mementoes of her sister's popping up like a bad dream. It's a recipe for disaster, and Vanessa, being rather not-so-smart in this equation, hurdles towards doom with the eagerness of a kid being told he can pick out "two toys" from the store.

So I thought this book was fine. Vanessa is very much Not Like Other Girls and even though her sister really did sound evil, it was kind of gross that she kept being slut-shamed. Especially when Vanessa did some questionable things herself (frenching her new brother-in-law on the first day, for example, and then spending hours obsessing over it-- or being surprised that her marriage with Richard is a marriage of convenience-- GIRL, you didn't even KNOW him). I found myself skimming and rolling my eyes a lot, but there were enough creepy shenanigans that I wanted to know what happened next.