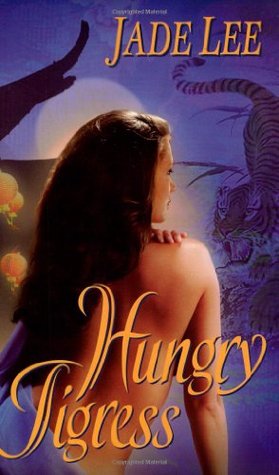 Well, it's AAPI month, and as I do every year, I've started to binge-read some of the Asian-authored books on my Kindle that, for whatever reason, I hadn't gotten around to reading. Jade Lee is not a new author to me. Earlier this year, I read the book WHITE TIGRESS, which kind of awed me with how bad it was. It was basically an enemies to lovers romance that went pretty in-depth into Victorian racism while also indulging in a bit of magical lactation porn featuring terms like "yin milk," "jade dragon," and "cinnabar cave." And you may be thinking to yourself, "I really hope that's referring to a bubble tea cafe, a Chinese restaurant, and a jewelry shop." BUT YOU WOULD BE WRONG, DEAR READER. SO WRONG.

But somehow, none of that was enough to prevent me from reading further in the series. I bought every single book in this wacky paranormal romance series, and the first book in her fantasy dragon series. Why?! I don't know. I feel like I'm being held hostage. And to be fair, HUNGRY TIGRESS starts out really good. Joanna is a well-meaning but privileged white lady who wants to help the Boxers overturn the Qin dynasty, but all the ends up happening is that her white saviorism gets her into trouble. She's saved by a monk who immediately starts berating her for how she treated her horse, insisting that she's going to be whipped. Okay, Christian 灰色. Just don't take her to your red room of pain, or whatever.

BUT OH NO. It turns out Fifty Shades of Monk is actually an imperial prince on secret assignment, and to keep her from talking he THROAT PUNCHES HER IN THE TRACHEA and then takes her to this perverted sex cult where, I KID YOU NOT, rubbing your boobs and jerking off are both considered purification exercises. Especially when you do them in front of someone else. Or have someone else do them to you. I could say more about this, but I already feel like I'm toeing the line of what Amazon allows in a cross-post pretty finely. This review might not even get posted, it's that racy, and it's not even my fault. How can I, the reader, be blamed for simply recounting the perversions of this book?

Anyway, Joanna and Prince Pervy Monk end up "partners," and then they listen to the Sex Cult Queen give this long and boring lecture with Powerpoint Slides (read: scrolls with dirty pictures on them). And afterwards she's like THANKS FOR COMING TO MY TED TALK. Also, she hates Joanna because she's white and keeps insisting that Hot Prince Pervy Monk pick another "purification" partner, but he's like, "Nah, we good." Even though he also hates her for being white. He thinks she has nice... uh, yin.

I'm sorry, but I can't get over the throat-punching, okay? That's the worst meet-cute ever. And he literally does it so hard that she can't swallow food or talk without going into these painful spasms that make it so she can barely breathe. Look, I get that it's historical. A lot of people were angry that in the first Outlander book, Jamie hits Claire for disobeying him. I didn't like it, but it's easier to stomach stuff like that in historical fiction than in modern day stuff just because that's what happened (even if it wasn't okay). But throat-punching crosses over the line in a pretty horrible way, and it's mentioned so much that even I started to feel vicariously uncomfy because it was so descriptive.

No matter how ragin' Prince Pervy Monk's jade dragon is, I don't think I can endorse a throat-puncher.