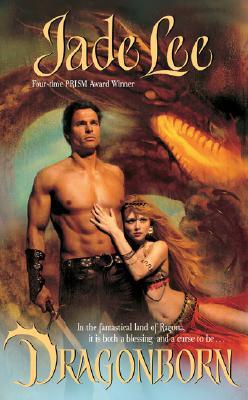 The premise behind this book is so interesting, too. There are people who bond with dragons (kind of like the Pern series), and they share a psychic link and all that jazz. Currently the evil overlord of the kingdom is busy killing off all of these dragonborn people, lest they pose a threat to his rule and if that doesn't sound like the plot of a JRPG, you can spray me in a pan and call me Pam.

Anyway, the hero of this book is the evil governor, Kiril who murders the dragon people for the evil emperor. And the heroine, Natiya, carries a dragon in her actual bellybutton which she wears why she belly dances. Because why not? Anyway, she gets kidnapped and Kiril decides he wants to bang her so he helps her escape from jail so she can take him to the dragon egg clutches and also so they can bang. AND THE SEX IN THIS BOOK OMG. If I never see the words "prock" or "belly-horn" again, I will be very happy.

I thought about reading forward because Love Spell is cheesy-- I know that-- and it was so bad it was entertaining and I actually really liked the world building, but Kiril's mansplaining and the bad sex scenes were a no from me.