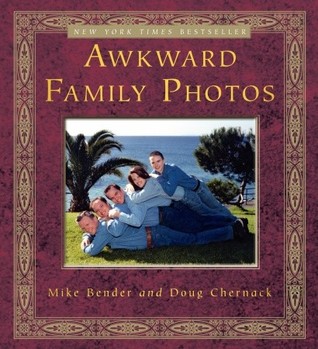 When I was in high school and college, these sorts of "found and submitted" photo dumping sites were very popular, and a lot of them eventually landed book deals. Some of the most famous were hosted on icanhascheezburger, but there were others, like People of Wal-Mart Awkward Family Photos.

A lot of these memes don't hold up very well. I feel like people were getting away with making off-color jokes well into the aughts, shaming people in ways that were classist, racist, fat-phobic, or misogynistic. But Cake Wreck and Awkward Family Photos both stand the test of time pretty well, because (1) the content they're hosting for the most part is inherently wholesome (people who care about family photos usually do so because they love their families) and (2) the hosters let the images speak for themselves and even invite posters to share the stories behind the photos, which I really enjoyed.

The best thing about AWKWARD FAMILY PHOTOS the book is that a lot of the pictures are cute and just kind of funny but in a way that doesn't really make the people the butt of the joke. Like, there's a picture of a Star Wars-themed wedding that I adored. And there's an Xmas pic where a family is dressed up in their pajamas and everyone matches except the dad, who's wearing boxers. And there's another pic of a family at the lake where the dad (AGAIN, the dad) is wearing a zentai suit for some reason.

My favorite pics were probably the ones of kids misbehaving in a funny way (torturing their dolls, or holding up an Etch-a-Sketch that says I HATE THIS during a family gathering while grandma looks on in disapproval), the funny pet photos, or the ones that have kids who are obviously in some sort of rebellion phase dressed up like goths, emos, and punks. YAAASSS. Especially if it looks like they're kind of secretly having a good time and are just living their best goth/emo/punk lives.

This is the perfect pick-me-up for whenever you need something light to cleanse the literary palette.