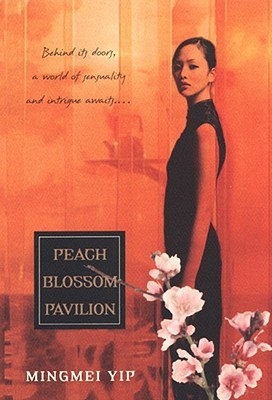 It's AAPI month and I've been trying to read as many Asian-authored books on my Kindle as possible. Obviously you should read diversely year-round but there's always a couple books that slip by me, so I thought I'd try to binge through them. Today I'm going to be telling you all about PEACH BLOSSOM PAVILION, a sort of MEMOIRS OF A GEISHA-esque story about a woman's rise, fall, and escape from a brothel in China.

First off, a caveat: this book is NOT for the faint of heart. Animals are killed. Bad things happen to minors. There is graphic sexual and physical violence. The book literally starts out with Xiang Xiang's father being unfairly tried and murdered by a warlord who was abusing and subsequently killed his own daughter, and then thought, hey I think I'll frame that one guy. And this forces Xiang Xiang's mother into monkhood, and she basically just donates Xiang Xiang to a brothel. #YOLO. I bet they don't make hallmark cards for that.

The rest of the beginning is Xiang Xiang getting groomed to auction off her innocence, just like in MoaG. What makes this a bit easier to read is that Xiang Xiang/Precious Orchid is not passive. She literally karate kicks one of her would-be patrons in the nose. And then when she won't sleep with this one guy, he tries to steal from her, but she shames him into giving up. It's brilliant. Unfortunately, Yip makes up for this agency by dealing all kinds of bad things out to the heroine, at one point even having her boobs skewered by bamboo in punishment by her madam.

The second half of the book, when she flees the brothel, is where the book gets kind of dull. There's a lot of running around. Xiang Xiang gets into some F/F action, which I thought was interesting, especially considering when this was published. Her female lover also drops a mega bombshell that ends up bringing the book full circle, culminating in a rather satisfying act of revenge. I could have gladly left the present-day interludes, which alternately have Xiang Xiang horn-dogging it up over her granddaughter's fiance, or bemoaning her long-lost beauty and sisters. It's very much Rose from Titanic going "it's been eighty-four years." Or whatever.

I didn't really like this book all that much. I think it was a mistake making the beginning so wild, because it kind of sets the expectations for events high, and people are going to be sad that the second half is such a yawn-fest. Assuming they make it that far and weren't alienated by the teen brothel/dog-eating/bamboo-as-torture-implement business.

I read another book by this author, SKELETON WOMEN, and liked it way less than this book so it doesn't feel fair to give it the same rating. I will bump up one half-star for sheer no-forks-given.