Dare to Be a Duchess by Sapna Bhog 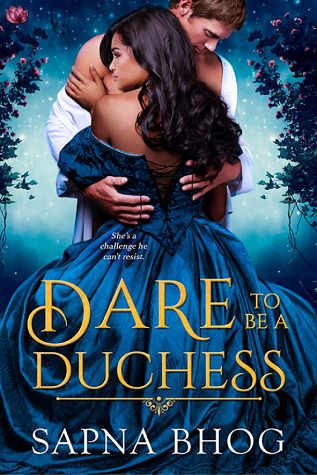 While reading this book, I kept thinking that this is what THE PRINCESS STAKES could have been, if it hadn't been utterly gutted by the book's (I personally felt, incredibly unfair) cancellation by the romance community. When it comes to rep, I feel like authors of color are held to near impossible standards-- they have to be relatable, interesting, and inoffensive, all at the same time, but that is incredibly difficult to do, because relatability looks different for everyone, even within a specific community or ethnic group, and as for being inoffensive-- well, good luck with that. As ugly as our current reality can be, history is uglier still, and I think glossing over that and ignoring how much it really sucked to be anything but a white man with land and a title in history is, well, dangerous.

So that's just part of the reason why I was delighted to read DARE TO BE A DUCHESS, which also features a biracial heroine of Indian decent. She is privileged, but her life still kind of sucks in some ways. She has two loyal friends and the protection of a noble family, but most of the idiots in the ton tolerate her at best to her face and spend all their time gossiping about her and being scandalized by her when she's turned the other way. Her father was disinherited by her grandfather for marrying an Indian woman, and he refuses to recognize her, despite the fact that she is, and ought to be recognized, as a lady. The racism and fetishization she faces can be hard to read, but they do feel real, and even though Lara is not bogged down by them, they do color her world and frame some of the choices she makes. Because she knows that if she marries the wrong person, she'd just end up locked in a house somewhere while her husband frolicked around with white mistresses and partook freely of her money.

Despite this, things are still pretty great for Lara. She has two wonderful friends-- Cammy and Anne-- and the protection of Anne's family, especially her guardian, Robert. Anne's older brother, Wolf, also acts as a sort of reluctant protector, even though he's aloof and standoffish and snobby. When he goes to a very naughty masquerade party that Lara & co. have sneaked off to, though, he finds himself seeing her as a woman for the first time. AND THEN THEY KISS and my boy immediately becomes obsessed, and I think we can all agree that an obsessive hero who occasionally toes the line of Psychoville is a hero for the ages.

Wolf is honestly such a great hero, because he's brooding and a little bit dangerous (although not to the heroine, obvs), and his "SHE IS MINE" and "TOUCH HER AND I KILL YOU" mindset really spoke to my toxic heart. But like all arrogant alpha heroes, he makes mistakes. He pushes her away For Her Own Good(TM) and he hurts her, also For Her Own Good(TM). And this really fucks things up between them. Until my boy makes good on the grovel (which, indeed, he does). The way his cold and tortured nature is juxtaposed against Lara's goodness and flightiness is so well done, and there were several moments in this book that I almost teared up because ~that emotional connection, tho~.

It's like someone handed this author a list of my favorite tropes and was like, "Go forth!" Naughty masquerade parties, aloof and tortured hero, flighty and difficult heroine, SEXUAL TENSION, insidious murder plot, evil asshole villain man who is obsessed with the heroine, family drama, female friend squad, serious BROMANCE, and just basically everything you could wish for in a romance to make it interesting and angsty and not too fluffy. When I saw that the sequel for this book, which is about one of Wolf's friends, features Knife to the Throat as one of the tropes, I threw down that $3.99 like a big shot placing a bet at a high stakes poker game, because that's how I roll.

Definitely recommend this author to anyone who likes Amalie Howard.