My Wicked Pirate by Rosa Sharon 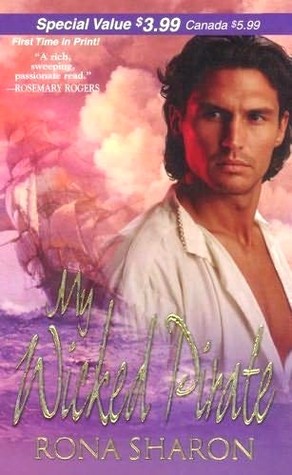 Zebra romances are so much fun. Unfortunately, a lot of their best imprints are now defunct, but I believe a lot of the rights reverted back to the authors and you can get them pretty cheap on Kindle. Like this one! MY WICKED PIRATE is everything I love in a non-dark romance. There's adventure and swashbuckling and banter and forbidden romance and a hero who understands What Women Want™ (answer: dinner, a lavender-scented bath, and a cold glass of Lambrusco).

Alanis is on her way to see her fiance when she is kidnapped by the terrifying pirate, Eros, who is known as The Viper. Don't worry, I think his name is silly too. BUT HE'S HOT, even if he is named after the naked love angel of the Greek gods. Anyway, it turns out that her fiance has been keeping Eros's sister as his mistress and he's in love with her, but he was going to marry Alanis anyway to keep up appearances. Gross. So after an exchange is done for the two women, they go to the bad fiance's Jamaica estate, and basically end up switching back when Eros tricks Alanis into joining him once more as he flees for his life.

It turns out the pirate is not all that he seems though. Even though he is every bit as terrifying as his reputation claims (in all ways), he has a dark and honestly rather tragic secret. He's also involved in some very high-level political machinations which involve the House of Sforza, King Louis of France, and the Dey of Algiers. And the book takes us to all of these places, dealing out angsty romance and court intrigue by the handful, and I ate up all of it on a silver spoon. The romance was prolonged but really well done. By the time they finally did it, I wanted to bang a gong in celebration. I also really liked the chemistry between the H and the h, and how you could really feel how high the stakes were.

I do feel like the book was a little too long, though. By, like, maybe about one hundred pages. It also employs a trope I really hate: Pretending I Don't Love You for Your Own Good. The hero is also a bit of a Sad Draco in Leather Pants, which can be a trope that I enjoy, but sometimes the way he levered his emotional issues against the heroine was so frustrating that I wanted to scream. Maybe it worked for me because you could tell that he really did care for the heroine, even if he didn't always know how to show it. Also, some of the sex scenes are not so great. Most of them are, but towards the end, when the book started to lose steam, it lost steam in other places too. MAJOR KUDOS, however, for casually finding excuses to make the hero shirtless, multiple sensual bathing scenes, and exquisite descriptions of food that had me craving Middle Eastern feasts at 2 in the morning.

Never read anything by this author before but I'll definitely be checking out her other stuff.