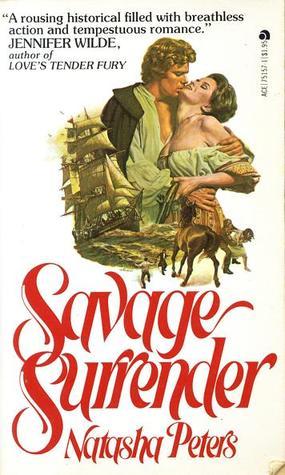 OH MY GOD. I don't throw the phrase "best romance novel ever" around a lot, and I honestly can't remember the last time I read a romance novel that literally made me let out a huge gust of a sigh by the time I got to the last page. SAVAGE SURRENDER starts off at 99 on a scale of 100, and proceeds to repeatedly break the metrics as the plot zooms off at breakneck speed. How do I even begin to summarize everything that happens in this book? I can't. So this is going to be a bullet review.

⚜️ I love this heroine. Elise starts out seventeen or so and definitely acts her age. I honestly loved this about her. She's so dramatic and hilarious, even when she's being a twit. And her character development was just amazing. This is a woman who refuses to bow to anyone. When she is abused at the hands of her tormentors, she tricks some pirates into teaching her how to fire pistols and duel so she can handle any further attacks on her person PERSONALLY. Girl, yes.
⚜️ Villain love interest. Her first encounter with the hero is non-con, which sets the stage for their relationship. He's a user and a taker. But he's also not without charm, and if you like that old skool style of alpha hero who doesn't take no for an answer, well, he's that guy. He tomcats around and is crude and manipulative and kind of awful. But he's also funny, and it's hilarious how out of touch with his feelings he is. I don't know how Natasha Peters did it, but she wrote a likable jerk.
⚜️ Enemies to lovers romance. The whole time I was reading this, I kept picturing the couple as Harrison Ford and Carrie Fisher as Han Solo and Leia. He's an immoral mercenary, she's nobility and a firebrand. AND ALL THEY DO IS FIGHT. I ate that up on a silver spoon. The back-and-forths they had were profoundly epic. Was that romance toxic AF? Yes. Did I care? No.
⚜️ So much action. Whether it's treachery on a slave ship, gallivanting around and partying with pirates, or accidentally entangling oneself with the Southern Old Money equivalent of the Lannister family, there's so much going on. It's brutal and it's un-PC but it's never boring. I liked how characters kept popping up again when you least expected it, sometimes scarily, sometimes awesomely. For example, a slave that that Elise saves in the beginning of the book ends up being able to return the favor later, and he has a pretty cool trajectory character-wise that didn't feel stereotypical at all.
⚜️ That ending though. It was perf.

SAVAGE SURRENDER has been on my wishlist for years and I finally decided I was going to treat myself and buy some of the books I've been waiting for. I liked this so much that I immediately went out and bought several other titles from her backlist. It's such a shame that she didn't write more books because I think I'd gladly read everything she wrote. LOVE.