A Hoboken Hipster in Sherwood Forest by Marianne Mancusi 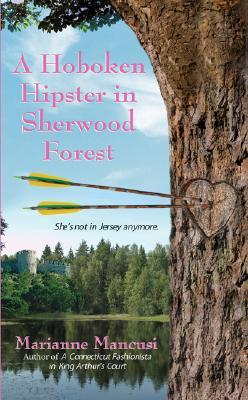 Okay, so Love Spell is one of those publishing imprints where their books are either good bad or bad bad. And I thought this was the later. The premise is REALLY weird. The main character, Chrissie, is at a RenFaire with her annoying coworker, Kat. Kat makes the age-old mistake of antagonizing a "gypsy woman," who sends her one thousand years into the future. To get her back, Chrissie has to go back into the PAST and secure the Holy Grail. Because you know, wibbly wobbly timey wimey.

Anyway, Chrissie goes back into the past and runs right into Robin of Lockley, AKA Robin Hood, and I really need you to know that the back blurb of the book I have refers to him and his merry men as "boyz 'n the wood." Book, your 2007 is showing. It shows its 2007 in a lot of ways, actually, because the book is narrated in first person and Chrissie is about as hip as Marci X with her references to still SUPER relevant (sarcasm) things like Baywatch or Charmed.

I will give points for Chrissie ingeniously telling Robin that she's a male eunuch to explain her height and high-pitched voice. I don't think I've ever seen that done in a time-travel book, although she keeps "OH NO he thinks I'm a boy because I'm flat-chested and my hair's in a ponytail-ing" and pride makes her want to correct him, even though being a woman in medieval times is like being the lobster dish at an all-you-can-eat buffet. You don't want to be the lobster at an all-you-can-eat buffet, is what I'm saying. I loved the title of this book but I am not keen on the execution. Next.