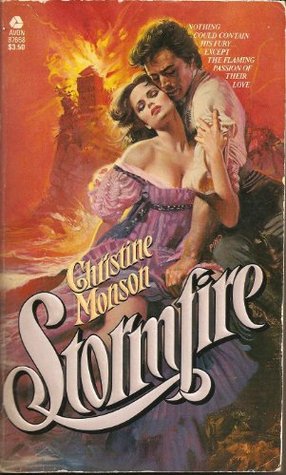 STORMFIRE is a very difficult book to get in physical form. In terms of price, it's right up there with THE SILVER DEVIL. I despaired of ever getting a copy of either, and then my mom found a cheap copy of STORMFIRE at a thrift shop. Obviously, I started reading that shit immediately, because wouldn't you?

It's easy to see why it's become such a cult classic. Not only does it have a beautiful cover, it's also got a unique story and setting. STORMFIRE is set during the Napoleonic Wars/Georgian England, but set in Ireland, during the British's violent colonization of the people. The hero, Sean Culhane, is out to get English viscount, John Enderly, for leading the genecide that wiped out most of his town and resulted in the violent death of his mother, as well as other people he knows. He does this by kidnapping Catherine on her way to school and raping her, before sending her blood- and semen-stained underwear to her father by courier.

After that, the story becomes a chaotic maelstrom of ups and downs. Catherine is brutalized and treated as a servant and a whore. She's beaten and starved. At one point, the hero makes her nose bleed by hitting her in the face. Even when he starts to fall for her, he's still impossibly cruel. One minute they might be having sex in a lightning storm or he's buying her sexy lingerie; the next, he's slathering makeup on her face and ordering his men to gang-rape her, or letting one of his mistresses starve her to the point that her baby dies in the womb and gives her sepsis(!). Both the hero and the heroine sleep around gratuitously, and sometimes it feels like they spent more time with other people than they did with each other.

What ultimately sort of ended up making this book a win for me was the passionate, beautiful writing, and the emotion clotting the pages. Sean also has some pretty terrible things happen to him, as a sort of poetic justice for his mistreatment of the heroine: he's partially castrated, whipped with iron spikes, and shot and stabbed several times, at least one of those times with poison. Other people have said that the book was about one hundred pages too long and I agree. The gratuitous smutty intrigues with Napoleon and Josephine, I could have passed on. I was ready to wrap up after Sean's torture, when Catherine helped rescue him. It really felt like both characters suffered way more than they had to.

The ending also kind of felt abrupt. When I finish a romance story, I like to imagine that the couple will last. I didn't really get that feeling with these two. It felt like they'd be off-again and on-again for the rest of their lives, which wasn't all that satisfying. Still an incredibly memorable story, though.