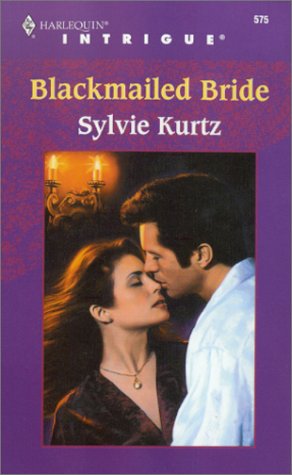 So I'm slowly working my way through some of my romance hoard and this is the recent book in my experiment. BLACKMAILED BRIDE was kindly obtained for me by my sister, and at a glance, it seems like it would be everything I'd love. Suspicious hot guy who may have killed his wife? Check. Blackmailed into a relationship? Check. Gothic vibes? Check. Hint of the occult? Cheeeeeck.

But pulpy gothic this is not. We're treated to a special snowflake of a heroine who meets the hero when she's desperately trying to buy back a family heirloom. When someone else buys it, she's like BUT THAT'S MINE, even though she doesn't have the money to pay for it, but because Karen-- oops, I mean Cathlynn-- is a dead-ringer for Jonas Shades's missing wife, he's like okay if you pretend to be my wife for a week to appease my nosy lawyer, I'll GIVE you the heirloom.

And then Karen-- oops, Cathlynn-- is like FINE. But you CAN'T call me by your wife's name. And he's like-- rightfully so-- but that's stupid. And she's like whatevskis, I don't care. So he calls her Cat. And they basically proceed to botch and fumble every inch of this "clever" scheme of theirs. We're supposed to think Cathlynn is spunky, but she's just incredibly annoying and dumb. There's also a dash of that obligatory 2000s fat phobia where the heroine whines about how she's ten pounds overweight. Because of course, nosy lawyer is like "Lol, you look FATTER, but I always thought you'd look better with more meat on your bones."*

I was going to give this a two but as I'm typing this out, I realized I was pretty annoyed by this book.