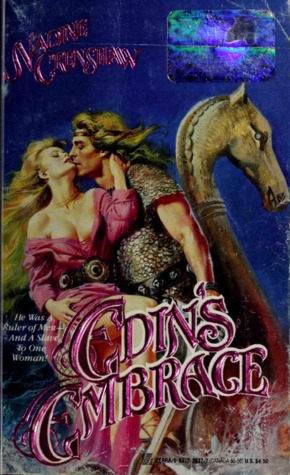 I've been slowly working my way through my bodice-ripper collection. EDIN'S EMBRACE has been on my radar for years, but I haven't really liked most of the viking romances I've read (90% of which were written by Johanna Lindsey), so I was a little leery about picking it up. Finally, though, I decided to bite the bullet and give it a try... and I am so glad I did.

Edin is an English lady who is engaged to her childhood best friend, Cedric. She's feeling ambivalent about the nuptials, however, since she isn't really attracted to him and she's also a virgin. Unfortunately for them, they never have a chance to work it out. Vikings come and murder Cedric and a whole bunch of other people, and Edin and a lot of the people who used to be her servants are all taken as slaves.

The hero in this book is Thoryn and he is a bad-ass motherfucker. I am a sucker for icy heroes who give zero fucks, and he fits that bill to a T. He murders the heroine's fiance right in front of her-- while he's in the middle of molesting her, in fact. He attacks his own men if they defy him, and rules with an iron fist and a massive blade. The only person who actually really dares to defy him is the last person who should: Edin herself.

This book was so amazing for a variety of reasons. First, Thoryn actually walks the walk of badassery, so when he humbles himself for the heroine, it usually happens in a subtle way. He doesn't kill her for running away, even though that's the punishment for runaway slaves. He pretends to give her the illusion of consent when he finally beds her (it's forced seduction, but both of them know he could have forced himself on her violently). And Edin has a valid reason for acting the way she does. She's a sheltered noblewoman who is used to being obeyed, so she has a lot of pride, and when she's subjugated in front of the people who used to be her servants and now revel in bullying her, it hits different.

EDIN'S EMBRACE is not without the usual litany of 1980s purple prose. Her pubic reason is described as "gently mossed" and I lost it when the hero compares her blonde pubes to "yellow parsley." But the book also feels exquisitely well researched, and when there are raids or descriptions of the viking homelife, it really felt transportive. ALSO, one of the villains-- a freeman who ends up as a "cripple" and therefore shamed-- kind of ends up with a pretty sweet redemption arc, and the other villain, the hero's mother, Inga, is 100% pure grade A batshit crazy. We're talking Mommie Dearest/Flowers in the Attic levels of crazy. And the way the author foreshadows her madness and drags it out-- GOLD.

Sadly, this book, like all of her others, appear to be out of print. I hope it gets rereleased, though, because it's really fun and the romance is so meaningful and emotional and fraught, and I actually loved the heroine just as much as I loved the hero. I can't wait to read more of her books!