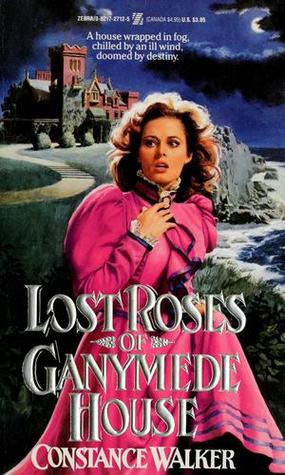 A while ago, I found out that a bunch of old Zebra gothic romances had been released on Kindle, and I bought a couple that looked the most interesting. Zebra publishing is one of my favorite umbrella imprints, and their gothic line was somewhat new to me. LOST ROSES OF GANYMEDE HOUSE has an amazing title and an amazing old skool cover, but the execution, for me, wasn't all that impressive.

There are three schools of gothic premises: heroine coming into an inheritance, heroine entering a marriage, and heroine taking on a new job. This is the latter category, where the heroine, Sara, is to take on the governing of two young children. The love interest is their widower father, Mr. Grayson, who is the most uptight dude I've encountered in a while as a hero of romantic fiction. He didn't really have much chemistry with the heroine at all, which is disappointing in a romance.

Virgil and Antonia are the two children and they were fine. There's also the adult cousin, Mr. Moore, and the dead wife, Rosamunda, whose presence still haunts the property in the form of roses and a Greek maze.

The set-up was interesting but it was honestly really dull to read about. I didn't really feel like Sara had much personality and it was painfully obvious who the bad guy (or girl) was. I ended up skimming pretty heavily until I got to the end, just to see if my suspicions were right. They were.