Sword of Darkness by Kinley MacGregor 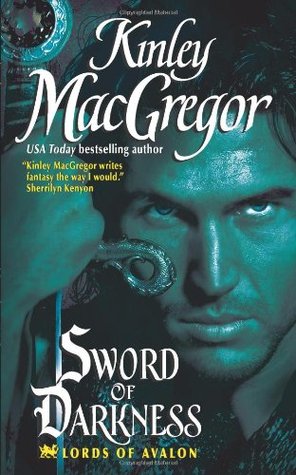 I feel like this book blackmailed me into liking it because it did a lot of things that really fucking annoyed me, and yet I couldn't put it down. I'm currently doing an audit of the villain romances I have on deck because I want to feature some of my favorites, and this is one that has been recommended to me by several people. A tall, dark, brooding type who basically lives in his armor and wields a sword capable of ending the world? YESSSSSSS.

The heroine, Seren, is a weaver living in medieval times but she has just been rejected from apprenticeship. As she is walking home, stinging with failure, she is assaulted by two men claiming to be knights and that she's to be the mother of the next Merlin. Being a peasant woman and a rational human being, she assumes that they're about to rape her and have their fun with her, so when a mysterious man on horseback offers assistance, she takes his hand.

Unfortunately for her, the would-be rapists weren't rapists at all. They were actually agents of Merlin-- and the man who abducted her is the Kerrigan, the champion of Morgen Le Fey. Whoops. They plan to use her as leverage to take over the world, and she just moved the dark pieces one step closer to checkmate. But one thing none of them ever counted on was Kerrigan falling for their captive.

So this is like villain romance lite. Kerrigan threatens to rape Seren a couple times, but apart from brooding and killing some people who deserved it, he doesn't do anything outright evil. Seren is the typical heroine in these sorts of romances-- good and idealistic to the point of near stupidity and not at all believable. I did like her but it's because hating her is like hating a Disney princess or a bunny. Anyone who hates those things is probably a psychopath. Who hates Disney princesses and bunnies? The serial killer next door, that's who.

The sex scenes in this book were actually really hot-- the scene in the mirrored room was EVERYTHING-- but there were two gross-out things for me in this book that kept me from giving this a higher rating. First, the fetishization of the heroine's virginity. It's referred to as her gift (which, ugh) and when he kisses her he goes on and ON about being the only person to ever claim her mouth and being able to taste her innocence (which also, ugh). Because this is sort of set in the fantasy equivalent of medieval times, I could *sort of* buy it, but I really didn't like it.

The second thing this book does that really annoyed me is right after the hero and heroine have sex-- like, literally days after-- people just KNOW she's pregnant, and start talking about "the child" and "the baby" even though it's literally just cells at that point. Pro-choice me cringed at this because on the one hand, I GET IT, but on the other hand, language like this is why we just lost Roe v. Wade. IT'S NOT A BABY. It's not even a fetus. Something about that just really squicked me out.

Apart from that, I thought this was fun in a cheesy aughts fantasy sort of way. Like the BLACK DAGGER BROTHERHOOD, I kept thinking "this is so dumb" but being unable to put it down because the story was so entertaining. The bromance between Blaise and Kerrigan was hilarious and I loved how Merlin was a woman and locked Thomas Malory in a dungeon for besmirching her character. At times, it had a portal fantasy/Narnia vibe to it that was almost nostalgic. Just know going into this that it's essentially fated-to-be-mated with a lot of those tropes and dated whoops!sexism references that can make you feel like you need to apologize to your Women's Studies professor.