Unmasked by the Marquess by Cat Sebastian 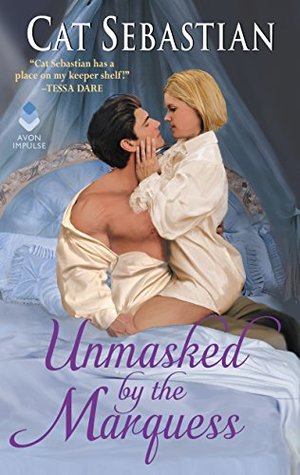 Okay, so take this review with a grain of salt because I know this author is super popular, and I think she'll appeal to readers who like hist-rom authors like Sarah Maclean, Olivia Waite, and Erica Ridley. I've tried to like all of these authors because they seem like incredibly nice people who do good things for the romance community, but their books are just too, well, nice. I like romances that have some sort of conflict, either external or internal. Maybe because I'm a person who has a lot of conflicts, both external and internal, and it's validating to read about characters who go through hell and still have that happy ending.

I actually tried reading this book a couple years ago and I stalled in the same spot I'm stuck in now. There's a lot to appreciate in this book. For starters, the hero is bisexual/pan (on page) and he talks a little about that struggle. He's also uptight and very posh and he wears glasses(!) and is old enough to be going slightly grey. I liked Alistair a lot and his struggle with his happiness versus his need to be correct for the marquessate was pretty well done.

The other lead, Charity, is non-binary, and I thought that dynamic was interesting-- but it's also not immediately clear. I had no idea she (she uses "she" pronouns in the narrative at all times when not dressing up like a man) was non-binary. It's not super clear from the text, except maybe where it's implied by how she feels more comfortable in a man's clothes. If I hadn't known from other reviews that the NMC was non-binary, I would have just thought that this was a book with a heroine who was super into gender-bending for the agency that it gave her and who was maybe questioning her own sexual/gender identity. I'm not non-binary so I couldn't tell you if this rep is accurate, but given when it's set, I guess it also makes sense that the non-binary protagonist wouldn't use they/them pronouns and might have a lot of confusion about what non-binary meant to them in a time where society was pretty violently against anything that didn't fit neatly into the cis-heteronormative construct.

So yeah, this book wasn't for me. But a lot of my friends liked it, so it might be for you.