My Favorite Thief by Karyn Monk 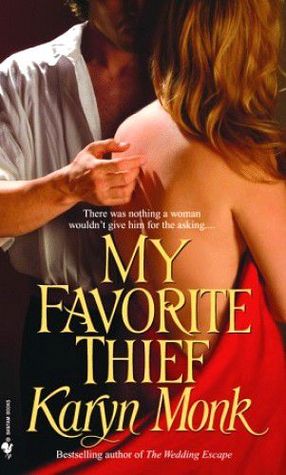 I've only read one other book by this author, which was a medieval romance called THE WITCH AND THE WARRIOR. It's one of those non-rapey medieval romances that doesn't come across as too fluffy, and as someone with food sensitivities, I really appreciated seeing the food sensitivity rep in the book, and having it identified through an elimination diet. That was really neat.

MY FAVORITE THIEF is a totally different book. It's set in Victorian times and opens with a jewel thief trying to steal a necklace at a party. Weirdly, the heroine, Charlotte, helps him and encourages him to take her hostage to make his escape. Which is pretty weird, but I guess when you learn a bit more about her background it kind of makes sense.

Anyway, after she and her friends heal him, he gets away, but she's able to figure out who he is when she sees him flinch from an injury he got at the robbery during a ball: and of course, surprise, surprise, he's a dashing earl. And, surprise surprise, the heroine decides to blackmail him because she desperately needs money to pay off her evil abuser of a father.

That's a lot of the story so I don't want to say too much else because spoilers. So I'm going to talk about some of the tropes instead. There are a lot of tropes in here that I really enjoy: jewel thief characters (a trope I didn't even think I liked until I was wooed by books like  Liz Carlyle's THE DEVIL TO PAY and Meagan McKinney's MOONLIGHT BECOMES HER), found family, heroine with a dark history, hurt/comfort, and tormented/haunted hero. There's also disability rep in this book. The hero suffers from what I believe are severe migraines (his father committed suicide because of them) and the heroine has a limp because of a badly-set broken leg from a childhood beating (triggers).

There are a lot of triggers in this book for basically everything and some of the stuff happens on page and some doesn't. I felt like the author made good choices determining what to show and what to hint at. I was also really relieved that Charlotte wasn't actually sold into prostitution as a nine-year-old child (although I think it's hinted that she ended up selling herself later in life, like teens). Her father was the actual worst and I felt like he got off way too easily at the end, which was disappointing. I also felt like there was too much insta-love between the hero and the heroine. They really don't have that many scenes together, and while I liked the mystery and the thieving elements enough to continue, I wouldn't say that this is a particularly good romance, nor did the characters have much sexual chemistry.

Overall, this was a fun, quick read. I bought the first book in the series because I want to read more books set in this universe, but it's not as good as THE WITCH AND THE WARRIOR.