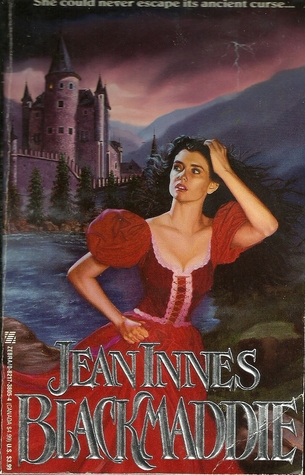 Duuuuuude, this is one of the craziest gothic romance novels I've ever read. What makes it extra notable is that it's published by Zebra, and their gothic imprint was usually pretty tame (think Victoria Holt), but this was more like something Rachel Cosgrove Payes would write under the Playboy Press imprint. It was that bonkers.

Charlotte Brodie is half-Scottish, half-English. She works as a teacher, where she is having an affair with one of the other teachers, but she also helps out her seamstress mother. One day the two of them find out that her grandfather is calling all of his relatives to him like he's collecting Pokemon cards as he nears his final moments, to his castle known as Blackmaddie. Charlotte hems and haws but decides to agree to it because her mother wants to go, but they won't let the mother go unless Charlotte is there to accompany her. Unfortunately, Charlotte's mum dies when she's run over by a carriage, and then she is sexually assaulted by the landlord WHILE her dead mum's corpse is in the room.

From there, the book only gets weirder. Her relatives all despise her, citing the Scottish hatred of the English because of the Battle of Culloden (admittedly, a valid reason). But all of her step-cousins seem to be lusting after her, she has a cousin-cousin who despises her for being The Prettier Woman That All The Boys Like More. And the grandfather seems to be mistaking her for one of her cousins(?) who died, Katrina, who was the spitting image herself of the castle's name sake, Black Maddie, of whom there is a salacious portrait hanging in one of the upstairs rooms.

It doesn't take long for the accidents to start happening, whether it's a shove down the stairs or a near-escape from a vicious attack hawk. There's multiple sex scenes, some graphic, and two pretty graphically depicted sexual assaults (which, as other readers have pointed out, don't do much to further the narrative apart from making Charlotte question her traitorous passions). There's also a pretty disgusting scene where, when her cousins find out about her first assault, begin interrogating her about it extremely inappropriately, asking her what it felt like and whether she enjoyed it. WOW.

BLACKMADDIE truly is a bodice-ripper of the days of olde, which makes the 90s publication date even more amusing. The book takes a VERY long time to get moving considering this book is only 300 pages. I think by page sixty, Charlotte still hasn't gotten to the castle. I thought the cast of creepy family members was probably the best part, and the occult twists, while classic components of most of these sensationalist gothics, were really done well here. Questions over inheritance and family secrets are also always entertaining to me, and I thought Innes had some particularly memorable scenes in here.

Did I love this book? No. But was it fun and ridiculous as all get out? Yes.