My Heartbeat by Garret Freymann-Weyr 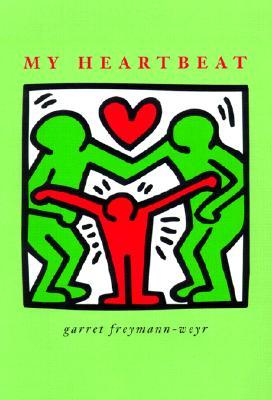 It's Pride Month and I've been trying to read all of the LGBT+ books on my Kindle that I wasn't able to get to during the rest of the year. MY HEARTBEAT was an exciting choice for me because it's actually a book that I'm revisiting-- when I read it for the first time, I was a teenager myself. For many years, this was one of my favorite books, and I remember having a huge crush on the love interest, James.

So first, a disclaimer. I feel like a lot of LGBT+ books from the aughts were written with straight/cis people in mind as the primary audience, because often, a straight/cis person is the main character in these books. They aren't questioning their identities or having something happen to them that changes the concept of their own gradually forming identity; usually, in these books, they are questioning an LGBT+ person's identity or the LGBT+ person is something that "happens" to them. Which, admittedly, is hugely problematic. MY HEARTBEAT does this to some extent, but it ages less poorly than books like WHAT HAPPENED TO LANI GARVER and LUNA, in which the leads in both cases are bigots and their relationship with the LGBT+ person is meant to be educational.

MY HEARTBEAT is a short book and the plot is pretty simple. Ellen is the daughter of a WASP-y East Coast family, the sort of family where the kids go to private schools and the dad reads thick books in German for fun. He called Jane Eyre "romantic drivel," so obviously I hated him. Ellen has an older brother named Link, who's a math genius, and the "smart kid" in the family that her parents are pinning all their hopes on. Link has a close friend named James that he does everything with. James is a year older than Link. He's an artist who smokes cigarettes and is given large amounts of money by his absentee family and he basically lives alone. When I was a kid, teen me thought James was living the dream. Anyway, one day, James and Link have a fight, and Ellen starts to question whether James and Link are just friends. When she confronts them about it, they have a bigger fight, and Link ends up storming off in a huff.

The whole thing kind of starts a chain reaction that has everything coming down like a house of cards. Link starts slacking off in classes and basically having a mental breakdown. It turns out that the snobby father wasn't just pressuring Link to do well at math and go to Yale, he also tried to bribe him with "be straight" money, which upsets the mom and Ellen. James comes out to Ellen and says that he likes men and women (the label "bisexual" isn't really used), although he has never had sex with women before. Ellen goes to the library to research "gayness" and learns a lot about Michaelangelo. By the way, this is New York in 2002, but at least the one gay bookstore in New York has a "woke ally" discount (and no, I'm not joking about this-- it's 15%, in case you were wondering). She and James start dating, while Link conspicuously dates a girl and continues fighting with his parents. Eventually, things resolve.

Okay, so I loved this book when I was a kid, and honestly, compared to some of the other LGBT+ books from that era, you can tell this one is trying to be really inoffensive. But it has some problems, and it's been so long since this book came out, I can't tell whether they're a product of the era or just bad writing. First off, the term questioning isn't really used or explored, which I think is what Link is. He loves his friend but is afraid of it being sexual, and that fear is couched in the societal rejection that Ellen doesn't seem to understand still exists. Her rallying cry of "but things are fine now!" is straight privilege, plain and simple. Also, this is 2002. Gay people literally still couldn't get married. The second problem is the way James is portrayed. I still love him, the pretentious cinnamon roll of my youth, but I feel like the author turned him into a manic pixie dream boy. His role in this book is literally to educate Ellen-- not just about gay people, but also to indoctrinate her into a sexual relationship as well, and he's eighteen and she's fourteen, which feels a little weird. His identity is also questionably portrayed. He's been with men and one of them was one of his father's law partners while he was still underage (so problematic), and all three of the men he slept with were to make Ellen's brother jealous. James casually mentions that this was because he knew Link wouldn't get jealous of a girl, which also wasn't explored and felt nearly biphobic to me-- like, he was assuming that because James was gay, any relationship he had with a girl wouldn't be "real." Ellen is kind of like that, but the opposite: she makes a big deal of being the first girl that James slept with, to the point where it almost feels like an extension of the fantasy that some women have of "turning" a gay man straight. Lastly, it's mentioned at some point that James needs to take an AIDS test before sleeping with Ellen, but this is a throwaway comment as well, and we never really hear about that again, although apparently James examines Ellen's hands for papercuts before they do anything, which felt... squicky, like it is underhandedly implying that bisexual/gay equals unclean. that didn't sit right with me.

The writing in this book is incredibly beautiful and wistful and I loved all the literary references. Ellen trying to appear smarter and more sophisticated than she is is one of the most realistic parts of this coming of age memoir, and I thought it was cool how she and James would go places on their dates and just people watch and make up stories about people for their art. Stylistically, it reminds me a lot of Sarah Dessen, and how her heroines always sounded like world-weary bar waitresses instead of teen girls. MY HEARTBEAT is the same way. Ellen does not sound fourteen. The book is easy to read anyway, but in hindsight, it feels more aspirational than age-appropriate. It's also very, very intellectually snobby (which is maybe why I liked it). As others have said, the length is part of the problem. It's under 200 pages long and it felt like every time the author hit on a potentially important talking point, she'd pivot away and go back to the teen romance. Part of me desperately wants to give it a five star rating just because of nostalgia, but it has so many problems that I'm taking off a star.