King of Flesh and Bone by Liv Zander 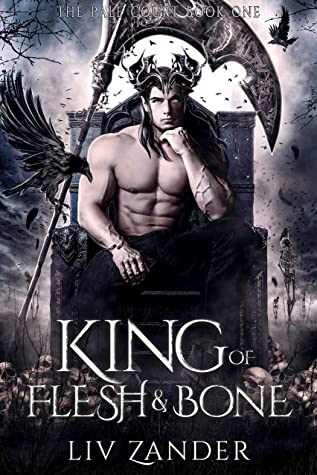 I was really not keen on this book, which is a shame because I can see what it was trying to do and it had some interesting world-building. The problem is that it deep-dives into the sex way too fast and it's not all that sexy. The word "seed" is used 26 times, and the heroine calls her clit her "nymph" (which is mentioned 17 times-- that's 17 too many). I also, as other readers have complained, really wasn't feeling the chemistry between the h and the H. As far as I can tell, he was only into Ada because she was warm and hot.

This book is set in a world filled with death. Ada is dragged into Enosh's realm by a mule and is horrified by the evil King of Flesh and Bone who can transmogrify the dead and the living. Kind of like a cross between a necromancer and a blood mage. There's also a bit of Handmaids' Tale misogyny incorporated into the world, where woman who are infertile are called "unwomen" and sold as whores, because what else are they good for?

This could have been a better book if the misogyny had more grounds and was challenged a bit more (I'm thinking of the book, THE DEMON OF DARKLING REACH). I also think that it would have been better if there was more sexual tension between the leads before they consummated the relationship. I feel like BookTok tends to hype up books that don't have any delaying of gratification. They seem to praise books that dive right into the sex and have edgy scenes that can be summed up as buzz words. And if that's what you're into, that's cool. But I will sink hours into a 700 pages book where the H and the h don't even meet for several chapters and maybe don't even bang until page 300 if I love the characters and the world-building and the writing, and I sadly can't say that here.

P.S. I'm not rating this low for the dub-con. So don't even try. It's the writing and the characterization I took issue with here.