King of the Rising by Kacen Callender 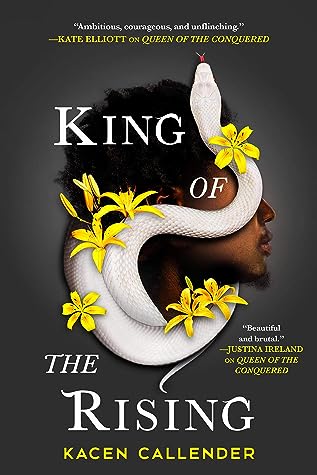 I have been looking forward to KING OF THE RISING since I first finished and loved QUEEN OF THE CONQUERED back in 2019. I really enjoyed QotC because it does so many things I enjoy-- non-Western fantasy setting, morally ambiguous main character, and challenging, real-world concepts that are basically reworked as moral thought experiments with no cheap or easy answers.

KING OF THE RISING takes off exactly where QotC ends, post-coup, with Sigourney imprisoned post-rebellion. The new narrator is now Loren, who was Sigourney's slave until the uprising, and now he's one of the lead architects in furthering the revolution and getting himself and the other native islanders outside assistance from off the island. But it's not easy. His proximity to the white colonists, as well as to Sigourney, make him suspect, and his idealism is tainted by his own anger, and there is no room for such neat and clean outcomes in a world that has been sharpened by blood and oppression.

I wanted to like this book but right off the bat, I had difficulty getting into KING OF THE RISING. Loren just isn't as compelling a character as Signourney, and everything felt so slow-paced compared to the first, which had the brilliant set-up, the cutthroat tension, and the surprising twists. Also, love her or hate her, Sigourney is a one-woman powerhouse with incredibly conflicting motivations and that made her really interesting to read about. I'm not saying Loren doesn't have conflicts, but his don't stand out the way Signourney's did, and it's not all that interesting to watch people stage a rebellion only to have it flounder and fail (even if maybe that's realistic). I read spoilers for the book because I was curious to see if I wanted to move forward, and I don't think I do. I know authors don't owe us a happy ending in fiction, but as a reader, I can choose how deeply I want to venture out into misery.