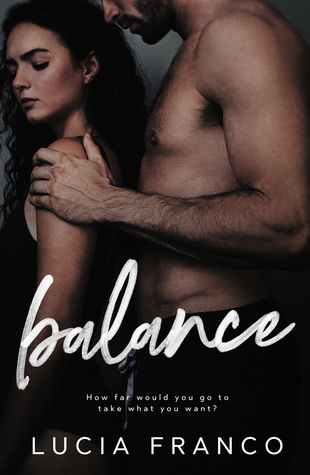 I don't know if the book community realizes this, but when they "cancel" a book for being problematic, they're essentially just boosting it in the algorithm and informing people who didn't know that it existed that, well, it exists. Even if the buzz trends negative, the book will still spike in sales. Take me, I had no idea this book existed until I saw people talking about it on Twitter. And the part of me that internally stomps its foot and goes NO when people tell me not to do something I didn't even really want to do in the first place suddenly went, "Hmm, I kind of want to read this book now."

BALANCE was actually pulled from Amazon and reworked, based on what I've seen in other reviews. In the original, it looks like the heroine, Adrianna, was fifteen. Now most concrete references to her age have been removed, except mentions that she's still "underage." I'm not sure she's still fifteen in this version. It seems like the author might have implicitly aged her up, but it's not clear. I thought she was sixteen or seventeen, based on some of the things she said, but she doesn't have her license, which does point younger (although I got mine late). IDK, the vagueness makes it even weirder.

I have a lot of thoughts on this book after finishing, so as with all of my conflicted reviews, I will be doing bullet points.

👍 All of the details about gymnastics. The physicality of the sport really comes through here, and it was so sensory that I actually looked up the author to see if she was a gymnast. Apparently she was, as well as a cheerleader, for ten years. Some sports romances gloss over the hard work and the training, but this one does not, and I really liked that about BALANCE. It was my favorite part.
👍 Adrianna actually acted her age. Apart from her uncomfortable level of interest in sex, she felt like an authentic teenager. The things she thought and did felt realistic. She could be a bit bratty, but considering her rich and kind of aloof family, and her privilege, this made sense, too. I liked how hard she worked and how passionate she was about her sport.
👍 Hayden. What a sweetie. I hate that this book is a love triangle taboo romance, actually, because I wanted her to end up with the nice boy her own age (I sound like such a mom, omg). I mean, he watched movies with her and helped drain her blisters. He's a keeper, babes.
👍 Heroine gets a UTI from unprotected sex. Maybe this would be in someone else's dislike column, but I actually like seeing STD/UTI rep in fiction because it is a real thing that happens and I don't think people should be shamed for it. Kova acted like the morning after pill was good enough protection (ha-- jerk), but pregnancy isn't the only bad thing that can happen from not having protection, especially if your partner is with other partners (or vice-versa). So even though that scene was super hard to read (and made me take a super long and grateful pee afterwards), I appreciated it a lot.

👎 The sex in here was so awkward. It made me uncomfortable. Not a lot makes me uncomfortable but adults taking advantage of loco parentis roles really does. And I felt like the author tried to comp for it by making Adrianna really precocious in that area, but she was also a virgin. At one point she asks her friend what an orgasm feels like? But then on the other hand she is talking about how to get off and it's just so sexual. The only other book I can think of that was like this weird blend of experienced/innocent was Penelope Douglas's CREDENCE, and I didn't really like that, either. For the same reasons.
👎 Kova is a huge jerk. I couldn't stand this hero at all. He wasn't good for the heroine and, imo, he wasn't good enough for her. I thought it was skeevy how he calls his girlfriend (YES, he has a girlfriend) by the same nickname that he calls Adrianna. I hate how he was sidelining his girlfriend and she was written as needy when she just seemed really concerned and upset at being gaslit and potentially deported. I hated how he tried to frame the relationship as being the heroine's fault, like she was the one who was supposed to be setting boundaries. I hated how he portrayed rough sex as some huge sin that he would be tainting an innocent with, and that the (presumably) impure girlfriend had to be the vessel for this lasciviousness. And I really hated how he threw a wrench in her career just to make her hate him enough not to be with him, because he STILL didn't have the spine to stay away. That sort of retaliation is exactly why rules are in place to keep relationships like this from happening.

Overall, I thought this book was pretty good. It was shockingly long, but I got through it in about two days. There were a number of typos and clunky sentence structures, but that's pretty common in most indie works and it didn't bother me too much. My biggest beef with this book is the fact that the hero is honestly so undesirable. I don't really feel like this is a romance at all, so much as a sort of dramatic tragedy and maybe a fascinating character study of two very flawed people. I didn't find it sexy at all.