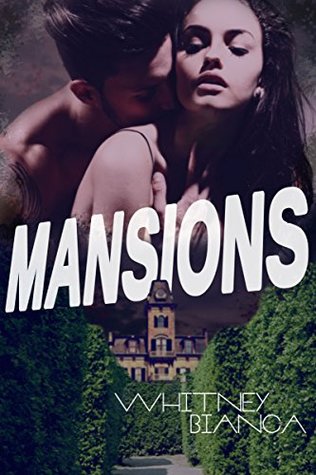 I keep telling myself that I need to read more indie authors but then I never do. I'm always afraid that I won't like the book-- and even though that's a risk with any book being published, I feel worse giving a bad review to a book that was written by someone who doesn't have a major publishing house to back their PR. And I'm not going to lie. But one of my friends recommended MANSIONS to me on my Instagram and told me that it was a gothic romance, which is basically my love language, and when I looked into it further, it looked like it was also going to be toxic and intense, which sounded super fun. Especially since I've been on a lil' gothic romance kick lately.

MANSIONS starts out intense and then gets really, really dark. Unlike a lot of dark romances, it doesn't do this by gratuitous gore or other shock tactics. Most of the darkness comes from the toxic relationship, and the hero and heroine going down some very dark spirals. The hero, Dorian, is a sociopath and also a sadist, and the heroine, Adrienne, is a masochist with severe emotional issues. Childhood trauma has made her quick to run at the first sign of trouble, and she works as a photographer in war zones for the adrenaline kick, as well as to make a difference. When Dorian aggressively hits on her at a gala and demands that she come to his hotel to hookup, she's terrified by how much she wants him and immediately flees. But then something terrible happens, and when Adrienne comes back to the United States, she's been severely maimed.

From here, the book just gets even more toxic. The heroine is suffering severe depression and PTSD. The hero is manipulative and awful, but what keeps him from being totally unlikable is his scary devotion to the heroine. It's so fanatical, it's almost religious. He's been obsessed with her since an encounter from when they were children, and since then she's kind of become the One Thing He Could Never Have. And even though she's really vulnerable, she keeps coming up with ways to thwart him. So even though she kind of isn't exactly the flawless vase he thought he put on the pedestal, he kind of ends up liking her more for all of those cracks. At one point, he even says that he's not in love with his fantasy ideal of her, but who she actually is when she's in front of him, and I really liked that.

Some things that will probably upset readers: both characters are legitimately, melodramatically crazy in a way that you really don't see anymore outside of a gothic throwback or a soap opera. There is medical gore (light) from the heroine's accident. There is drug use. The hero has a mistress and a wife who he is sort of seeing in addition to Adrienne, but most of his interactions with them are off-page and it's clear that she is the favored one in this scenario. There are references to suicide and suicidal ideation, on and off-page. At a couple points, it got so heavy that I stepped back to work on a puzzle and think about the book to prepare myself mentally before continuing further.

At some points, this came very close to being a five-star read for me, but it had a ton of typos and it also felt a little too short. The story is fully realized, which is utterly impressive given the length, but I wished there were more scenes between the two of them when they were young and then over the years before they met up again as adults. I think it would have made this book even more emotionally devastating. Still, I think MANSIONS will stick with me for a while. What a gloomy, intense read. Eat your hearts out, Catherine and Heathcliff, lol.