Well, That Escalated Quickly: Memoirs and Mistakes of an Accidental Activist by Franchesca Ramsey 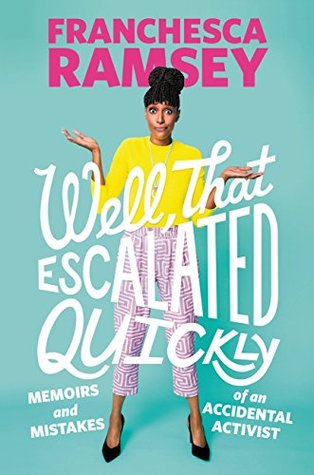 I bought this memoir on impulse, not making the connection that Ramsey was a popular YouTuber whose videos I actually watched prior to reading this memoir. So that was kind of an unexpected bonus to what was already a pretty awesome read.

WELL, THAT ESCALATED QUICKLY reminded me a lot of essayists like Quinta Brunson and Lindy West, who also talk about their experiences being famous women on the internet, what it means to go viral, how to deal with trolls, how to own up to your own mistakes, and what sorts of language to use in order to tackle whatever sort of goals you might want to accomplish on the path to being a good ally or getting involved in activism.

Franchesca Ramsey is so likable. You can tell right away why she went viral because she just has that ability to spin a narrative that makes you want to find out what happens next. My absolute favorite section in this book was when she talks about how to consume problematic media, and what sorts of choices you might factor in to your decision to either boycott the artist/director/author, or whether you enjoy but also consume it critically and not cut it slack just because you like it. She calls this being a "critical fan," and I think that's a really good term to use because our faves should not get a pass just because we like them, but it's also important to distinguish between problematic content vs. problematic individual.

I also really enjoyed her discussions about virality and what it was like being on the cusp of fame. She talks about some of the mistakes she made when she first entered the limelight, and I appreciated her comments about what it was like dealing with criticism from both a Black and a white audience (obviously, people chewed her out for different things, some valid, some not). She also talks about interracial marriage, and what her own experience like that was like. There's also a great section on cutting toxic people out of your life, and another about practicing self-care in a way that doesn't really tie in to the #branded version influencers like to sell. There's also a glossary in the back about words pertaining to activism and progressivism, so you can start your own toolbox.

I'm not sure what else to say about this book. It's relatable, it's eye-opening, and it's funny. She talks about some things I've never seen other famous people talk about (like the awkwardness of running into someone you've trash-talked on social media at an IRL event), and I feel like she's coming from a really good place, and you can tell that by how she addresses her past mistakes. I guess you could say WELL, THAT ESCALATED QUICKLY, because I went from knowing nothing about this book to loving it.