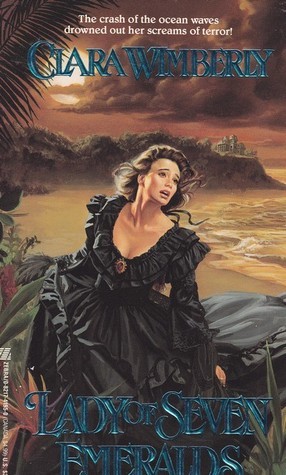 So as you may or may not know, I am a retro romance blogger, and one of my great loves is the gothic romance novel. Maybe it's my inner goth kid screaming and crying to get out, but something about haunted castles and bats in the belfry just get my little emo heart going asdflksdjfsjkl;.

LADY OF SEVEN EMERALDS is from the Zebra Gothic line, a now defunct line that I believe ran from the 80s-90s. Most of the books in the line were pretty tame and obviously inspired by Victoria Holt, but there were a few odd ducks in the line that ended up being pretty WTF (see my review for BLACKMADDIE).

In this book, the heroine-- who is named Rebecca-- is adrift after the Civil War. After whining about how much she misses her Scarlett O'Hara dresses, and how much it sucks that all her slaves ran away, we find out that she had a grandma who was blind and working with the grandma made her an expert in Braille. With her family dead, there's nothing better for this Georgia peach to do than to hightail it to Florida: specifically, to the beachside town of St. Augustine where there is a school for the blind.

Standing adjacent to this school is a castle on the cliffs, presumably airlifted from Spain. There, the Menendez family lives, a noble Spanish family tarnished by scandal and ruin. Ramon, the heir apparent to his line, is one of the students at the blind school. He went blind on the night his wife was murdered. Did he kill her? Maybe. Or maybe not. All the heroine knows is that he rings every single one of her bells and she wants to tap that ass. Because, you know, nothing turns a woman on like seeing a man brutalize his servants and then throwing his cane out the window in a fit of rage (true story).

🦇 The book is set in a creepy castle that is overlooking the cliffs. (Bonus points awarded if the castle is located in a place that, historically, was not known for building castles. Like, say, coastal Florida.)
🦇 There's a creepy matriarch/patriarch who seems weirdly concerned with preserving the family line.
🦇 The castle has a weird torture dungeon or orgy room and nobody wants to talk about it, but everyone is very quick to show it off.
🦇 Family curse. That's all. That's the bingo.
🦇 Someone gets poisoned and thinks it's because they're actually drunk.
🦇 Someone gets pushed down the stairs.
🦇 A room gets ransacked.
🦇 The hero is an overgrown manchild who is prone to having temper tantrums.
🦇 The heroine doesn't think she's pretty, despite having multiple men obsessed with her who swear they would burn down Rome if they could get inside her virginal panties.
🦇 Blink-and-you'll-miss-it racism.
🦇 There's a servant who either has a hunchback, dwarfism, albinism or some other condition or syndrome which really shouldn't be maligned, but because these books are based off of Victorian times when people were famously tolerant of those who were different... well..
🦇 Hero has a jealous relative who is DTF the heroine (and maybe he's the murderer, idk).
🦇 There's a jealous other woman who is DTF the hero (and maybe she's the murderer, idk).
🦇 The hero probably killed his late wife. I mean, statistically speaking.
🦇 Oh no, something gets set on fire.

What's that? You got bingo FIVE times? Well, duh. This is a gothic novel. They all have these tropes. Congratulations, you win the void. Because when you look into the void, the void looks back.