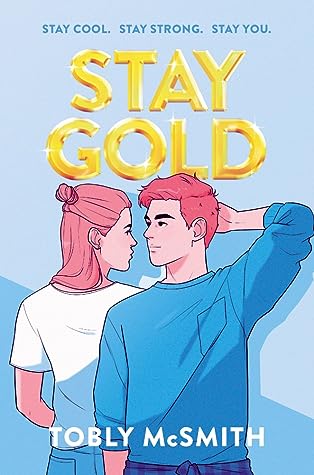 I bought STAY GOLD a while ago and was really excited to read it after one of my friends gave it a very high review. As others have said, though, I don't think the blurb really sets you up for how intense and angsty this read is going to be. The cover and blurb make it sound like it's going to be a fluffy, feel-good romance book, but it's actually loaded with some pretty devastating scenes, everything from physical assault to misgendering to use of slurs, and there's a scene at the end that is reminiscent of Boys Don't Cry, only not quite as bad.

The story is basically this. Pony is the son of an active military dude and moves around a lot. At his last school, he was out as trans and that basically became his sole identity-- he was sick of the positive and negative attention surrounding that. At his newest Texas high school, he's decided he's going to go about incognito. Which seems simple enough until he sort of catches romantic feelings for one of the cheerleaders and she likes him back. He has to tell her, right?

STAY GOLD is told in dual POV, narrated by both Pony and Georgia. Both of them are dealing with things outside of their primary relationship conflict. Obviously, Pony is hiding his identity, but he's also working a part-time job with a retired golden age movie actor named Ted London in order to pay for his own top surgery, but the actor has secrets of his own. Georgia, on the other hand, is recovering from a bad breakup and trying to find herself. She anonymously writes columns for the school newspaper because she wants to be a journo, but that doesn't fit in with the popular and pretty vibe that she's been cultivating for herself as a cheerleader.

As far as YA books go, I feel like this is geared towards a slightly older audience. It doesn't talk down to its readers and it deals with some pretty serious subject matter. I can see why some trans readers took issue with the book because it does deal with some pretty heavy stuff before slapping on a happy ending that almost feels too easy. But on the other hand, I think that stories like these can be valuable because they end up almost being hurt/comfort-like, showing that someone can triumph over suffering (even though it sucks that the suffering ends up being the catalyst to the triumph). I never really fully warmed to Georgia though, because of how she hurt and strung Pony along. I guess she sort of redeemed herself in the end, but this wasn't one of my favorite YA romances. Pony was great, though.