My Mess Is a Bit of a Life: Adventures in Anxiety by Georgia Pritchett 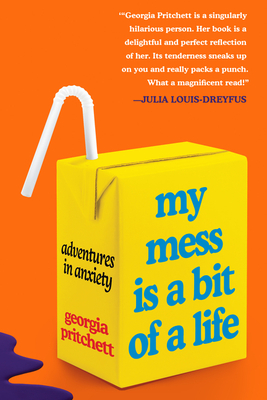 So as someone with anxiety who is also introverted, I was really hoping to enjoy this book. I liked the idea of this starting from an experiment that she was doing as part of her therapy. Part of the reason I started writing as a teenager was as a way to cope with my crippling social anxiety. I felt like I had no control in social interactions, and writing gave me a sense of control that I really needed, and later ended up being a source of validation, as well.

I think this author is trying to channel Jenny Lawson's brand of scattered, frenetic humor, but it doesn't quite mesh. The little vignettes end up feeling more like snippets from someone's journal, which is fine, but most journals aren't really written for the consumption of the public. It's also pretty depressing, too. Around the 12% mark there's a description of her father beating her pet parrot to death?? As someone who loves animals, I found that pretty upsetting, ngl.

Apparently the author is a writer on a number of very popular shows. I don't watch any of the shows she writes for, so maybe if you like those, the writing style of this book will appeal to you more. It always feels strange to rate a memoir you didn't like, because it feels like you're saying you didn't like the person, but Georgia Pritchett honestly seems, you know, just like any other person. I have no beef with her. I just didn't particularly like her style of writing.