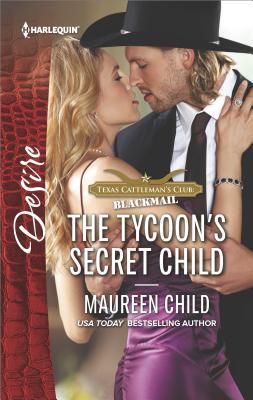 We're doing a reading challenge in the romance group I moderate for. The goal of it is to step out of our comfort zones and try to read sub-genres of romance novels that we haven't read before - or even actively avoid. In my case, the secret baby trope is one of these latter. I've never understood the concept behind it, and there's something a little cringe-worthy about a child being used to bring two people together who maybe oughtn't to be. I never like seeing kids used to emotionally manipulate adults, especially for "love."

Since I didn't own any secret baby romances, I went to Netgalley to see if they were offering any ARCs for review. THE TYCOON'S SECRET CHILD was one that caught my eye, and seemed the least offensive. Maybe even good. The summary was intriguing at least!

To the author's credit, this story is very well-written and the sex scenes are decent. I even liked the heroine, Belle, for a while, because she obviously loved her daughter very much and wasn't afraid to stand up to her, even if it meant telling off her old fling and letting him know exactly where he stood.

No, what killed the story for me was said old fling. The "hero," Wes.

Wes is the CEO of a number of Texas-based companies, one of them being Texas Toy Company. The biggest project is the "Just Like Me Doll," an American Girl-doll like clone where children can get customized dolls that look like them, along with personalized accessories. He's sure the doll will be bigger than Cabbage Patch Dolls, and is the process of brokering a merger with another company when an anonymous internet hacker going by the name Maverick drops him a weighty bombshell:

He has a daughter.

Said hacker also changes his Twitter handle to "Deadbeatdad," which sends local news into a frenzy. Suddenly, Wes's secret baby is big news, and the owner of the company he wants to merge with backs down, being a family man, claiming he doesn't like how Wes runs his personal life.

Wes immediately hunts down Belle, the father of his baby. He's angry, because he thinks that Belle should have told him that she was pregnant, and that he is entitled to the child simply because he helped make her, even though he essentially cut ties with the mom because she was too clingy (i.e. she wanted to marry him and not just carry on as his mistress of the night). Belle is not happy with this attitude, which makes Wes even angrier.

He'd missed her pregnancy, missed the birth of his daughter, missed every damn thing. If anyone deserved some sympathy around here, it was HIM (64).

Which is just crazy, because this is what he said to her when she told him she loved him back when they were still going out:

"You said that you weren't interested in getting married...had no intention of EVER being a father, and if that's what I was looking for, I should leave" (71).

Wes's response to this is totally irrational. He said he was talking about "hypothetical" children, not "real" children. This is his go-to argument whenever Belle (rightly) brings up his past attitude as her reasoning for hiding Caro from him. She didn't want the child hurt, how was she to know that he was just saying he didn't want children on principle, but that he'd be totally okay if one showed up? LOL! This is "internet troll" logic right here. Stand aside, Wes. I don't have time for your games.

Then the stalking and intimidation begins:

"You don't want to take orders from me? Well, I sure as hell don't take them from you. I'll stay as long as I want to, and there's not a damn thing you can do about it" (79).

After he shows up at her house without warning.

For the next week, Isabelle felt like a caged tiger in the zoo. Someone was always watching her - and that someone was Wes. Every time she turned around, there he was. At the grocery store. At Caro's school - (110).

After Belle reluctantly agrees to give him a chance at bonding with his daughter.

If he could convince Teddy Bradford that he, Belle and Caroline were really a happy little family, then he might be able to salvage the merger that meant so much to his company (122).

Wes manipulates Belle into coming to Texas with Caroline, where he pretty much then does his utmost to ensure that the child won't ever want to leave. Upon arrival, Belle discovers that not only does Wes already have a fully furnished room set up for Caroline packed with expensive toys, but he's also bought the girl a dog (because the mother wouldn't get her one, thereby making her the bad guy in this). He throws fast food, presents, and affection at her, even telling the child - without consulting the mother, first - that she could stay longer if she decided to go to school in Texas.

What makes this even more disgusting is that Caro has a degenerative hearing problem that is slowly causing her to go deaf, and Wes immediately barges into that sensitive issue, consulting doctors for treatments without asking the mother's permission, and - on the very first night that he shows up unannounced at their house - even attempts to schedule a surgery right in front of poor shocked Belle, taking it for granted that this is perfectly ok, to interfere with all of Belle's care.

The one touching thing Wes does for Caro is that he gives her one of those Just Like Me Dolls, even giving it hearing aids like Caro's so she can have a doll like her. Belle is so touched she has sex with him that night, but he ruins it when she comes to his Texas mansion because he announces that because she slept with him, he didn't bother giving her a guest room so she wouldn't have to "sneak" into his. Because one yes means infinite yeses, so why even bother asking first. What a prize.

Maybe this sounds mean, but I thought Wes should have suffered for what he put the heroine through. Between breaking up with her because she wanted a bit of commitment and romance, and stalking the heck out of her and her kid, he came across as a really bad guy. I didn't like that Belle gave into him so easily, and I wasn't pleased with their HEA. He never had to sacrifice anything, and he put the heroine through the wringer. That was not okay.

I've been told that the Harlequin Desire line caters to women who enjoy possessive, controlling heroes, which I do not, so maybe that's the problem: I'm not the target audience for these books. In any case, I've now read my first "secret baby" book, and I think I can safely say this genre is not for me!

Thanks to the publisher/Netgalley for the review copy!