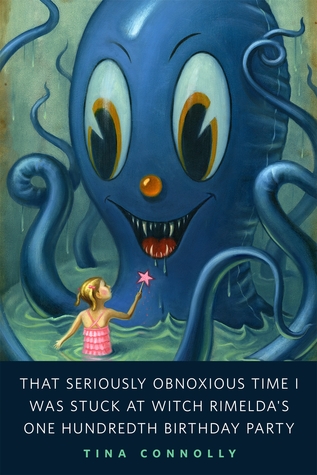 Real talk: I wanted to read this story because of the big, demonic bath toy-looking thing on the cover. As it turns out, the demonic bath toy-looking thing is actually a baby kraken. Apparently, witch kids are too cool for pinatas and Marco Polo; instead, they unleash a whole bunch of baby krakens in the pool and have a competition to see who can spell and then subdue them.

Camellia, the only person at this party who isn't the witch, isn't in the best of moods when she has to kill a rampaging kraken with a plastic fork. Being relegated to watch the little witches isn't much better; imagine a kid with magical powers. Scary.

Anyway, one of the mothers at the party reveals, to the adults, while Camellia eavesdrops, that she's angry at the librarian at her daughter's school because the librarian thought her mother was actually a grandmother. Witches are only as old as they believe they are, and this even has caused both this woman and her mother to age terribly because of the horrible, traumatic incident of this event. They want revenge.

Revenge, in the form of banana bread.

One of the children, Pink/Primella is horrified to hear this because she likes the librarian. But her magic powers aren't that strong, and Camellia has none to speak of. If they want to put a stop to Operation Banana Bread, then they're going to need help. But how to persuade a bunch of unruly witch kids?

I liked the twist ending. It was sweet how Camellia corralled the witch kids into doing her will by using reverse psychology (kind of like real kids), and I liked how she teamed up with Pink/Primella, and helped her feel better about herself. The only reason I'm not rating this higher is because it was a little too oddball for me, and it doesn't compare to some of the other Tor.com shorts. But it's cute.