The Dogs of Athens by Kendare Blake 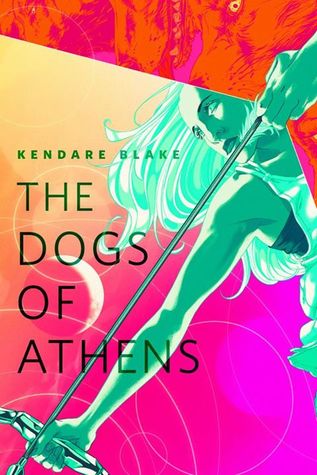 That bright, happy cover in the tropical 90s colors makes you think that you're going to be getting a jaunty, cheerful read.

THE DOGS OF ATHENS is set in Greece. A jaded Athena walks the streets with her pack of dogs, dwelling over the past, full of ennui, searching for lost faces even as she hunts for game.

In the crowd, she thinks she sees Actaeon, the young hunter who was unfortunate enough to spy on her when she was bathing hundreds of years ago. Athena caught him, turned him into a stag, and set his own dogs on him to tear him apart. The handsome man she sees now fills her with something like regret, which is vaguely unsettling because gods don't change, and don't regret.

The story takes a dark turn towards the end. I haven't actually read anything by Kendare Blake before. My friends have raved about her, and say that her stories are dark and her characterization is excellent. A snippet like this isn't much to go by, but I will say that I was impressed by how Athena's frustration and despair were captured in this short tale. She seems to be becoming more human, and I think that's why what happened, happened to her dogs. It was an interesting parallel to the original myth of Actaeon and made me wonder what happens next.

This is one of those Tor.com shorts, so it's free, and it's hard to be mad at something that was free. I did find myself enjoying Blake's style, what I've read of it, but I wish the short story had been a bit longer, so I could get a better sense of this strange and gloomy world where even the gods seem to have lost hope.